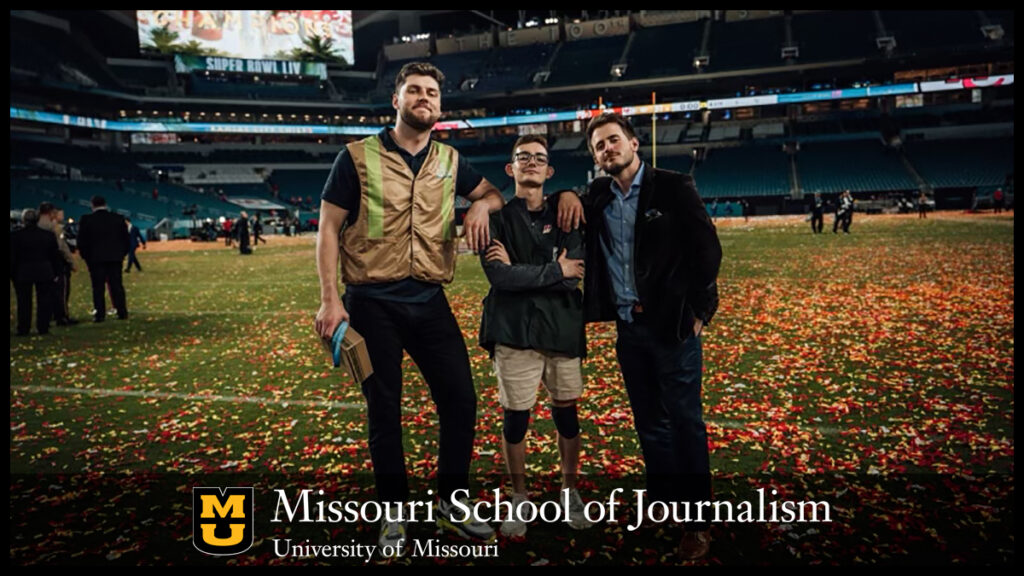 Lifelong Chiefs fan Diego Galicia is in Tampa covering the Super Bowl, thanks in part to the Tiger alumni network and a well-timed Instagram message.

Columbia, Mo. (Feb. 4, 2021) — Diego Galicia, a senior strategic communication major, is in Tampa covering his second consecutive Super Bowl for the NFL. It’s a dream opportunity for the current Mizzou undergraduate, and it all began with a Hail Mary direct message on Instagram.

Galicia, a born-and-raised Kansas Citian and lifelong Chiefs fan, got his start covering sports in high school. At MU, he began a formative internship with Mizzou Athletics. That experience showed Galicia how to blend his love of sports with his talent for expressive filmmaking.

“Getting to work with Mizzou Athletics and being able to get on an SEC field and basketball court was incredible,” Galicia said. Collaborating with staff, he filmed and edited content during games that was quickly shared with Mizzou Athletics’ many social media followers. He posted the best of his creations to his personal Instagram.

After a year of building his portfolio — including some freelance work covering Chiefs home games – Galicia heard about a Mizzou alumnus who was a content creator for the NFL. The “Mizzou Mafia” of powerful J-School grads in media is a well-known (though unofficial) MU institution. So Galicia decided to take a risk and reach out.

The power of posting

“Chiefs content will always catch my eye,” said Bryndon Minter, a 2015 Mizzou graduate with a degree in strategic communication from the Missouri School of Journalism and a manager of social content and creative for the NFL. A fellow Kansas City native, Minter received Galicia’s DM, scrolled through his feed and was immediately impressed. “He has an eye for cinematic stuff and how to capture both photo and video,” Minter said. “It was obvious when we connected that he was a go-getter and super talented.”

In Galicia’s bold networking effort, Minter also saw a bit of his own drive to succeed.

While at Mizzou, Minter remembers making and self-releasing his own viral video for Mizzou Football. Emboldened, he later landed a student job at the Mizzou Network covering different athletic events.

Now, as a manager of creative teams at the NFL, Minter said he regularly meets talented Mizzou graduates. “We have a wild amount of Mizzou people on NFL social,” Minter said. “It’s definitely cool to have that Mizzou connection, and we obviously want to keep it going.”

Since joining Minter’s staff in 2018 as a Live Content Correspondent, Galicia has filmed every Chiefs home game (by his count, more than 30). Galicia is also editing full time for the NFL’s social media lab while still finishing up coursework (he’s scheduled to graduate in May 2021). It may seem like a lot of responsibility, but Galicia isn’t fazed.

In 2020, both Galicia and Minter were in Miami to see the Chiefs defeat the San Francisco 49ers in Super Bowl LIV — Minter as a content creator and manager of teams working across a variety of channels, and Galicia, who is fluent in Spanish, as a collaborator with creatives from NFL México.

This year, unsurprisingly, things will be different on Feb. 7 when the Chiefs play the Tampa Bay Buccaneers. Due to the pandemic, Minter said his teams have to work without on-field access. “For my photos, I love pre- and post-game footage,” he said. “So it’s going to be tough to get those angles, but it is what it is.”

Galicia is following a group of Kansas City health care essential workers who were invited to Tampa for the game. His footage is scheduled to go up on many of the NFL’s social media channels.

Minter and Galicia have long since moved from digital acquaintances to real-world colleagues. As they have many times before, they’ll collaborate on content seen around the world. In the process, they’re also building the next generation of Mizzou journalism.

Thanks to last year’s win, hopes are high for a Chiefs repeat victory. But no matter the outcome, Galicia’s career is well on its way. Amid his quick success, Galicia credits the Mizzou community with encouraging him to get in the action.