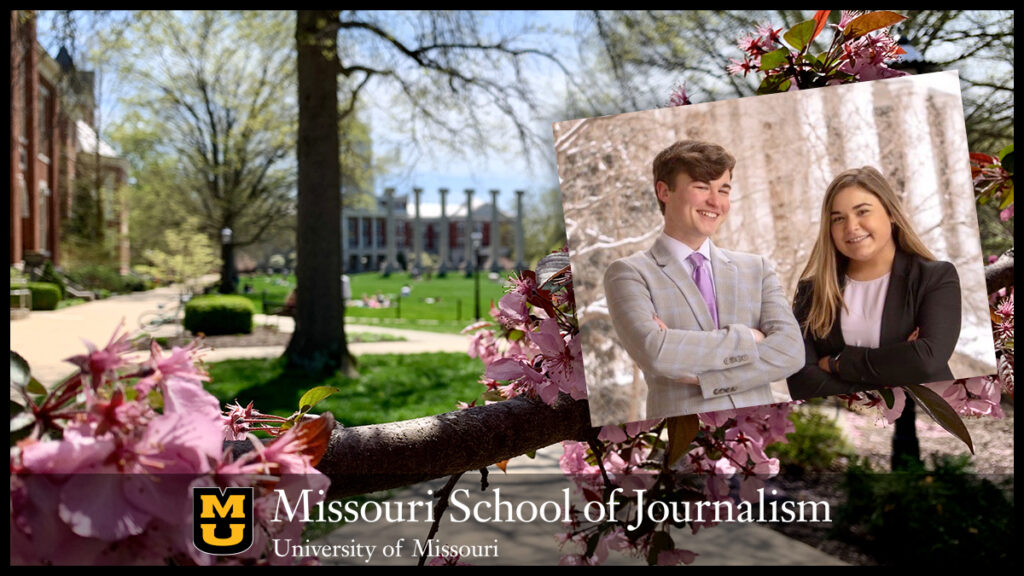 Juniors Landon Brickey and Emily Smith were inaugurated on April 6; they plan to use their strategic communication skills to convey what resources MSA has at its disposal.

Columbia, Mo. (May 11, 2021) — Two Missouri School of Journalism students  have been elected to lead the University of Missouri student body. Juniors Landon Brickey and Emily Smith, both strategic communication students, defeated candidates Will Shafer and Key Avingston-Banks by a margin of 134 votes — 1173 to 1039 in the Missouri Student Association (MSA) March election. Brickey and Smith were inaugurated on April 6 and became Mizzou’s 109th student body president and vice president.

Like everything else from this unprecedented year, the 2021 election was different. Most campaigning had to be done online, so clear communication was important. President-elect Brickey and Vice President-elect Smith saw this as their opportunity to win MSA president and vice president. And they were right.

“One of our tenets woven through our campaign was communication,” Smith said. “We wanted to clearly convey the issues we both saw come out of COVID.”

Those issues were put into their Renew Mizzou platform, which included a focus on COVID-19 health and well-being, improved mental health resources and education, sexual health education, assault prevention, and support for faculty and students of color. Brickey and Smith were also interested in supporting the Counseling Center, working toward a zero-waste campus, and improving campus parking and transportation.

During their campaign, they were intentional about clearly outlining and explaining their platform’s issues on their social media channels. In order to make sure their communication was effective, Brickey and Smith stayed close to home. They built a campaign team of journalism and strategic communication students, which included their campaign manager, junior Leah Glasser; their director of outreach, senior Mikaela Ashley; their director of marketing, junior Katrina Troy; their assistant director of outreach, senior Katie Sticklen; and their assistant director of marketing, senior Hannah Young.

“Almost all of our messaging was done through social media, so putting together a team of talented strategic communicators definitely gave us a leg up,” Smith said. “Through the graphics and creating the language, what we have learned in our classes helped us win.”

The foundation for this effort was created one year earlier when Brickey met Troy through their J4204: Intro to Strategic Communication and Design class their sophomore year, when they were in the same group for their final project.

“I was well-aware of Landon’s immense talent and intentionality,” Troy said. “I’ve always admired his work. When Landon reached out to me to serve as the campaign’s marketing director, it was an instant yes. Even with a lot on my own plate, I stand with Landon’s character and mission and knew that I wanted to do anything I could to help him impact the student body with his message of inclusivity and awareness.”

Brickey and Smith say they plan to continue to use their strategic communication skills to convey what resources MSA has at its disposal.

“We want people to know what MSA is and also what we can do for students because we have a lot of money and sway with administration,” Brickey said. “We also want to make sure that student voices are heard, so we can help amplify them.”

They feel that what they’ve learned through the strategic communication program about straightforward and transparent communication will help them to do their jobs over the course of the next school year.

“We are streamlining our channels of communication and are hoping to reach a broader population of the student body,” Smith said. “We’re definitely going to utilize several different techniques that we have learned through strategic communication projects and classes. I’m glad we have that background.”