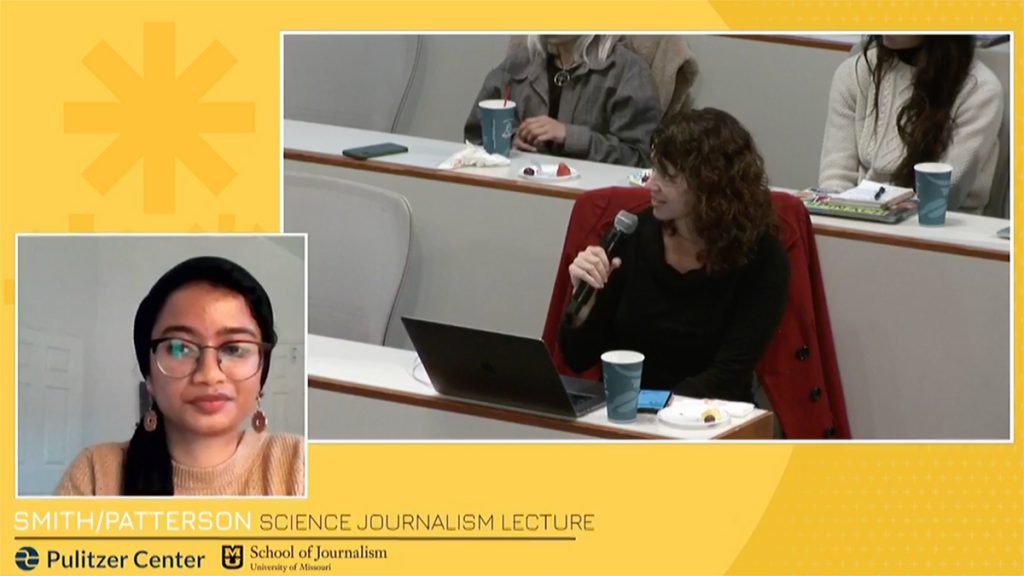 COLUMBIA, Mo. (Nov. 15, 2022) — Environmental reporter Amal Ahmed spoke with students at the Missouri School of Journalism on Friday, Nov. 11, as part of the Smith/Patterson Science Journalism Lecture series. A freelance reporter, Ahmed offered student journalists tips and tricks for researching and writing long-form environmental reporting based on her own experiences.

“Amal is part of a new generation of journalists coming onto the climate beat,” said Sara Shipley Hiles, director of the Smith/Patterson Science Journalism Lecture program and an associate professor at the School of Journalism. “She brings data smarts and a commitment to the communities she covers to listen and tell their stories.”

Ahmed currently writes for nonprofit climate newsroom Floodlight News, and her work has appeared in the Atlantic, the Guardian, Popular Science and the Texas Observer, among others.

During the Q&A, students also heard from Jana Rose Schleis, a 2022 Smith/Patterson Science Journalism Fellow. Schleis recounted how the $5,000 fellowship allowed her to tell the story of her hometown of Two Creeks, Wisconsin, which — despite a population of only a few hundred people — contains two nuclear power plants and 1,250 acres of solar panels, making the town an important source of energy for the state.

During the lecture, she walked students through the process of writing a long-form article for the Texas Observer about the expansion of the U.S. oil and gas industry. In particular, she highlighted the on-the-ground research and interviews she conducted in Texas communities impacted by facilities that liquify natural gas to prepare it for export.

“It’s one thing to hear about [pollution] and know the scientific angles, but being there on the ground, smelling it, getting a headache two hours later — that’s when you really start to understand what’s going on,” Ahmed said.

She recounted learning from locals in several communities along the state’s share of the Gulf Coast that regulatory agencies were not adequately policing air quality standards, driving home the point that official reports are only one side of any story.

“It’s important to balance an official government document with what you’re hearing on the ground,” she said. “There is always some tension there. Reports are done through government agencies, and members of the public might not agree with the findings.”

From shrimpers lamenting the loss of fertile and economically vital fishing spots to an archaeologist decrying the industry’s willingness to build over indigenous burial grounds and historic sites, Ahmed outlined how she carefully chose sources who were both knowledgeable and willing to have their views aired in public.

This balance between practicality and sensitivity resonated with the students in attendance, who asked several questions about community and expert reactions to the story during the Q&A that followed the lecture. The session turned out to be a practical lesson in the value of good interviewing, as sharp questions from students teased out an additional element of Ahmed’s story that arose after its publication.

“The war in Ukraine completely changed things,” Ahmed said, describing how a French energy company that initially backed out of a fracking operation in Texas due to environmental concerns came back when the crisis in Ukraine upended the global energy market.

For Hiles, the event was yet another example of the opportunities for behind-the-scenes industry insight available to students preparing for their careers.

“Getting to interact with working professionals is an important part of the education we provide,” Hiles said. “Students found her inspiring and approachable.”