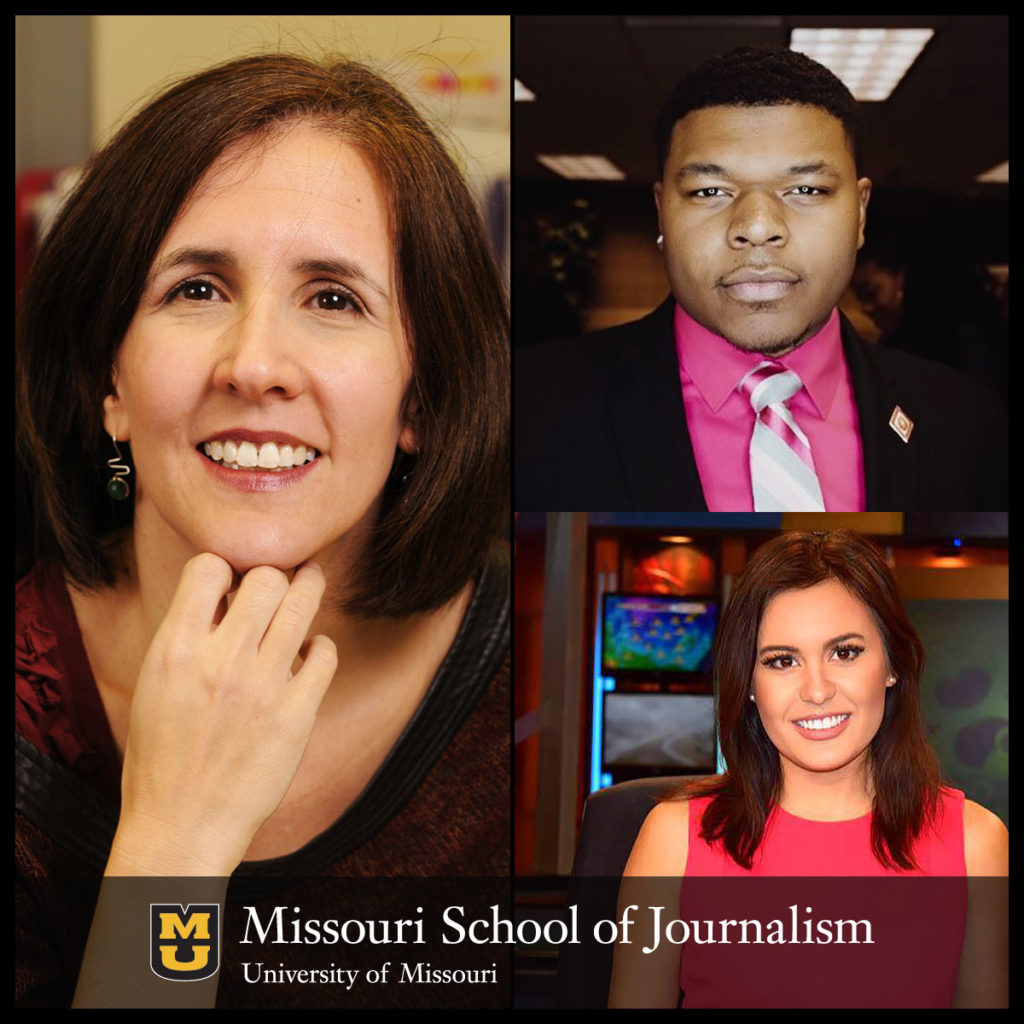 The alumna speaker for May 2017 commencement ceremonies will be Marina Walker Guevara, MA ’05. James Bender will serve as the student speaker with Hanna Knutson as the master of ceremonies.

Columbia, Mo. (May 4, 2017) — The Missouri School of Journalism will recognize 502 students at its spring commencement ceremony at 11 a.m. on Sunday, May 14, at the Warren E. Hearnes Multipurpose Building on the University of Missouri campus. Seating is open, and no tickets are required.

Graduate degrees will be awarded to 6 doctoral candidates and 53 master’s students, 5 of whom earned their degrees online.

Of the 443 undergraduates, a total of 193 focused on some aspect of journalism: 28 studied convergence journalism; 43, magazine journalism; 11, photojournalism; 38, print and digital news; 63, radio and television journalism; 10, science and agricultural journalism. There are 250 graduates who studied strategic communication.

The school will also recognize the first group of 18 students who studied documentary journalism. This new interest area was announced in 2014 and made possible by a $6.7 million gift from Bunim/Murray Productions Chairman and alumnus Jonathan Murray, BJ ’77.

Of the graduating seniors, 42 percent earned Latin honors by achieving at least a 3.5 grade point average.

The top 10 percent of the School’s graduates will be inducted into Kappa Tau Alpha, a journalism honor society founded at the School of Journalism in 1910. The KTA reception will be held before the graduation ceremony from 2-3 p.m., Saturday, May 13, in Fisher Auditorium. The 42 new members of Kappa Tau Alpha are:

The alumna speaker will be Marina Walker Guevara, MA ’05, deputy director of the International Consortium of Investigative Journalists, a global network of reporters headquartered in Washington, D.C.

Walker Guevara has managed some of journalism’s most consequential investigations on global corruption, including “The Panama Papers,” which involved more than 370 reporters in 76 countries and shook governments and businesses across the world. Other investigations include Swiss Leaks, Luxembourg Leaks and Offshore Leaks.

Over a 20-year career, Walker has investigated environmental degradation by mining companies, the global offshore economy, the illicit tobacco trade and the criminal networks that are depleting the world’s oceans, among other topics. Her stories have appeared in leading international media, including The Washington Post, The Miami Herald, Le Monde and the BBC.

The student speaker, James Bender, focused his undergraduate studies in radio-television reporting. He has served as a reporter and sports producer for KOMU-TV, mid-Missouri’s NBC affiliate, and as a reporter for KBIA-FM, mid-Missouri’s NPR member station. Bender received scholarships from the Emma Bowen Foundation and the Wentcher Foundation. He has been a member of the National Association of Black Journalists, Target Hope and the Delta Omega Chapter of Kappa Alpha Psi Fraternity Inc. He has also been an on-air personality on KCOU 88.1 FM‘s Real Talk Radio. Bender plans to pursue media sales upon graduation.

The master of ceremonies will be Hanna Knutson, who will graduate with a bachelor’s degree in radio-television journalism. From Lakeville, Minnesota, Knutson has worked at KOMU and KBIA and has held multiple internships. She interned at Thomson Reuters during a 2016 study abroad experience in Brussels. She used her cell phone to cover three coordinated suicide bombings while there, and her reporting of the event was used throughout the world. After graduation Knutson will intern at CNN in Atlanta and focus on news production.

It is a great honor to be here with you today. I want to give a warm welcome to all parents, siblings and friends who have come from many corners of the country and the world to share this special moment with us.

Graduates, the first thing I want to tell you this morning is “Thank you.” Thank you for choosing journalism. The world needs you pretty badly these days. The world needs intelligent, innovative, courageous journalists who see their profession as the public service that it is. That’s you.

We all know that the stakes are as high today as they have ever been. And it’s not just because the leader of the United States calls journalists the enemy of the people, as he tweets in the dark at three in the morning, in his bathrobe. Unfortunately, he isn’t alone in his depiction of our profession. Many politicians and other powerful figures, all over the world, have used and continue to use similar intimidation tactics when they feel vulnerable – and when we simply do our work. In recent years, even the most progressive officials in this country have persecuted whistleblowers and tried to meddle with our sources.

In far too many countries, it is still a crime to report the news, and journalists continue to be killed – sometimes in front of their families. On March 23, just weeks ago, that is exactly what happened to a Mexican newspaper reporter, Miroslava Breach, who covered politics and organized crime in the state of Chihuahua. She was shot eight times in front of her son. The gunmen left a note saying: “For being a loud mouth.”

She was the third reporter killed in Mexico in the month of March.

Despite the darker forces at work in our societies, this is, in fact, a time of immense opportunity. Journalism as we know it is being radically disrupted, turned on its head as we speak – and for the better.

Let me tell you the good news of what is happening out there, and that I have been privileged to witness from my job at a small nonprofit investigative reporting newsroom with big ambitions. I will summarize these trends in three words that I hope stay with you.

The first one is collaboration.

Journalism has long been a lone-wolf enterprise – you know, working in isolation, hoarding information, scooping others at all cost. That concept is in solid retreat, at least when it comes to stories that really matter. That paradigm has been replaced by networks of collaboration among journalists, networks that transcend newsrooms, national borders and censorship systems. They also rise above personal egos.

A new solidarity has emerged among reporters who understand that the big stories of our time are too complex and too global for one reporter or one media organization, no matter how large, to tackle on their own. Radical sharing – a phrase I really like – radical sharing of documents, data and knowledge is what made possible exposes like the NSA files as well as the Panama Papers, which my organization did.

At a time of nationalistic resurgence in our political systems, journalists are working together across borders in unprecedented ways. Our outlook is global, our data is global, our sources can be anywhere. If our story gets shut down in one country, our colleagues can publish the same story simultaneously in 10 other countries. Call it the Whack-a-Mole of journalism.

I am heartened to see that this class of 2017 reflects in its geographical diversity the global scope that defines the journalism of our time. You come from 11 countries: China, Singapore, South Korea, India, Pakistan, United Kingdom, Romania, Ukraine, Mexico, Georgia and the United States. If just one of you from each country represented here were to band together and work as a reporting squad, you can probably help solve half of the world’s problems.

The second word I want you to remember is data.

The future belongs to those journalists and media organizations who can master the use of information technology to handle large amounts of data. When I say “handle” I mean process, analyze, understand, report out and translate big data into great stories of public interest.

Companies like Facebook and Google are winning the data crunching race so far, along with government spy agencies. Not ideal. There are, however, cutting-edge newsrooms, many of them nonprofit companies, where engineers, developers and data analysts are working side by side with reporters, editors and fact-checkers. They are developing algorithms not to increase clicks, but to solve journalistic problems. They are building tools that allow journalists to analyze millions of records at a time to find crime patterns, to follow the money, and to map relationships between people and companies. They are helping us become better watchdogs.

So at a time when false information is muddying the public discourse at a scale rarely seen before, we respond with fearless, independent, data-driven, original reporting to hold the powerful accountable in the public interest. We combine state-of-the-art technology and traditional reporting to disrupt networks of corruption, whether it is at the school board level or in the international banking system.

The third word is impact.

The journalism I know, the one that I learned here at Mizzou, is one that seeks results. We want to change the world not through activism but through information. Think of the investigations into sexual abuse in churches, modern-day slavery by well-known companies and brands, or industrial-scale environmental destruction in vulnerable communities, and so many other stories about broken institutions and breaches of public trust that have saved lives, changed laws and stopped crimes.

As journalists working in the public interest, we don’t content ourselves with vanity stories; we pursue stories that will make a difference in our communities, that will reveal the harm that has been done to many.

My colleague Khadija Sharife from South Africa recently summarized this beautifully in a letter. She wrote: “Our stories may not individually change the world (although some do). But putting what happened on the record to be reckoned with, built on and maybe used later to create change – that’s more than a job. It’s holding up a mirror to the society we live in and contrasting it with the kind of society in which we want to live.”

Graduates, you could not have chosen a better, more exciting time than now to be a journalist. We are at a crossroads as a society and as an industry. And while we face extraordinary challenges, we have opportunities that our colleagues just a generation ago couldn’t have dreamed of.

To start with, you are not alone. Networks of trust among reporters are defying technology gaps, media corporate silos and censorship.

You are also better prepared than most. Know that. The Missouri Method has given you more real-world experience than the great majority of the journalism graduates across the country. And, of course, you had the world’s best professors who will continue to cheer you and mentor you for years to come.

Collaboration, data, impact. And one more thing: always, always be a loud mouth.

You did it. You are graduating from the No. 1 journalism school in America. You did it. For some of you, attending Mizzou is family tradition, and for some, you’re the first. The first to start the legacy. The first to cross that great bridge that we call graduation, into what we know as the real world.

The best journalists and strategic communicators around the world have graduated from here. The first J-School. The school that invented the study of journalism, the forefather of all J-Schools in the world.

From the time you stepped foot in the first journalism class, Career Explorations, you started the race, and you finished it today, my friends. And you went from a nervous freshman sitting in Fisher Auditorium to sitting in these seats wearing a cap and gown. Some faces you saw years ago in your lectures have been on television. Some names that you heard are now in newspapers and magazines or creating great ad campaigns. Feel old yet?

One last time, so the people all the way at the top can hear it: M-I-Z!