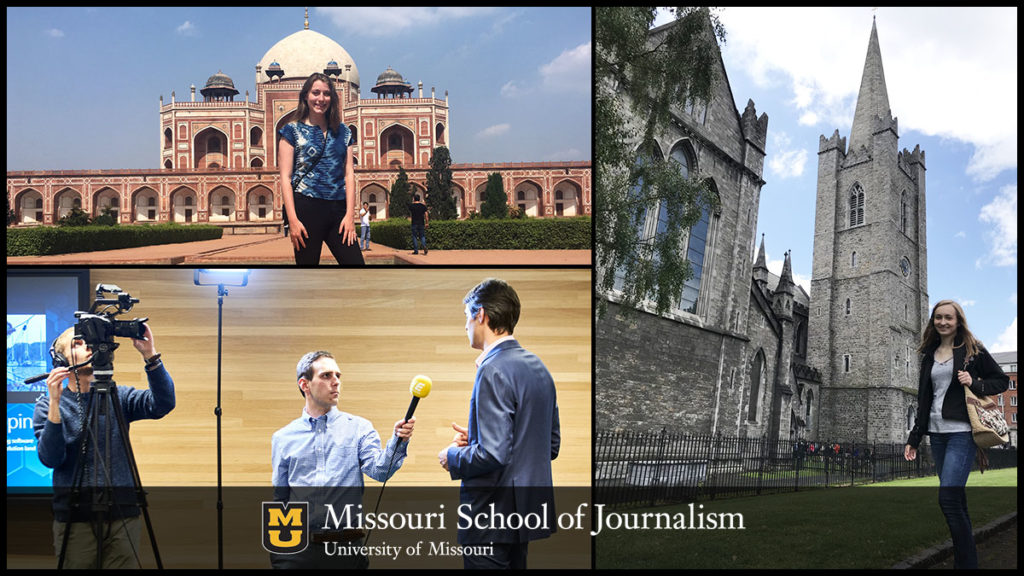 About 101 Missouri School of Journalism students immersed themselves in foreign cultures while gaining hands-on experience working abroad this summer as part of Global Programs.

They traveled to places including Spain, Italy and India and worked on a variety of internship projects, ranging from editing a Holocaust survivor’s memoir to writing about human-rights issues.

For some students traveling abroad was a new experience. Others, including senior Naomi Klinge of Seattle, have become seasoned travelers. With a double major in political science and journalism, she is required to work overseas at least once, but she says she has always wanted to work internationally.

Klinge has traveled with Global Programs three times. She has traveled to the Journalism School’s three-week Cape Town, South Africa program, where students work on projects related to the apartheid, a time of racial discrimination in South Africa. As a student she has also worked with the NGO International Crisis Group as a communications intern in Belgium helping with social media and website tasks. This summer she traveled to the School’s newest study abroad hub – Delhi, India.

While in India, she worked with the city beat team at the Indian Express, an English language newspaper. Her role included reporting and writing primarily human-rights-based stories, as well as shadowing other reporters. During her study abroad experience, she also completed a class to learn about Indian history and culture.

Going from one study abroad experience to another helped her become more sensitive to issues such as poverty that are similar in the U.S. and in the countries she visited, she said. She personally saw after living in the U.S. how one can become so ingrained in one’s life, that seeing these issues is harder.

“I think it helps me see the big picture and not get too close to something. Because I feel like when you’re really embedded or just when you’re part of a country, culture or state or even just a group for a long enough time, you start to not really notice things,” she said. “But I think being able to be away and also see different struggles with kind of a new perspective in different countries…I think as a journalist, that’s going to allow me, in the future, to be able to see the big picture, able to take a step back mentally, look at how everything is connected and to try to see what you’re missing.”

Senior Nicole Schroeder of Columbia, who is studying magazine editing, traveled to London this summer. During her internship, she helped edit manuscripts including a Holocaust survivor’s memoir for Can of Worms, an independent book publishing company. She said the experience solidified her desire to work in book publishing.

“I definitely relied a lot on the copy editing skills I gained from my magazine editing class last fall, as well as the need to be attentive to deadlines and problem solve when there were issues with technology or page formatting,” she said.

While she was in London she also took two classes. One focused on British history and culture. The other class was about international media and the differences between the U.S. and the United Kingdom.

Perreault also helped with social media efforts and the outlet’s “Tweets of the Week.”

His biggest takeaway was the importance of having plenty of background information before diving into a story, as well as being well versed on issues that might be talked about during meetings, he said.

His broadcasting classes, as well as his work for KOMU-TV in the School’s State Reporting Program at the state’s capitol in Jefferson City, prepared him the most for his internship abroad.

“It’s not exactly the same, but I mean you’re covering lawmakers and you’re doing a lot of similar things I ended up doing over there [in Brussels],” he said. “And simply learning how to write and being able to write copy, whether it was for video, a text piece, or just being able to write a script for the Tweets of the Week.”

Perraeault also took two classes while he was in Brussels, which included a class which helped him in his work covering the EU and a class on Belgium culture and history.