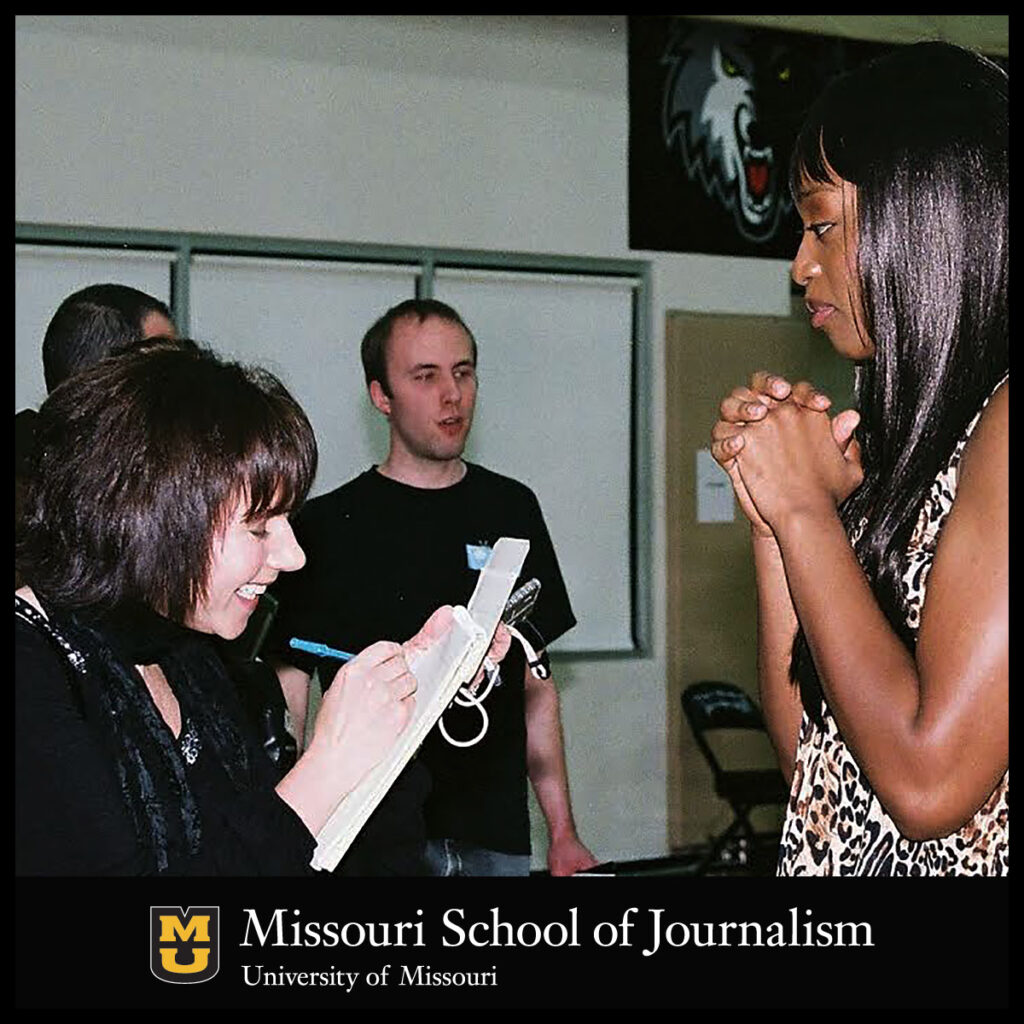 Columbia, Mo. (Dec. 11, 2017) — Rachel Blount, MA ’86, knew she wanted to go into journalism, but felt unprepared with her American Studies undergraduate degree from Notre Dame. Notre Dame didn’t have a journalism program in 1984, so Blount didn’t have any practical journalism experience. She knew she needed to continue her education before she entered the journalism field. After researching graduate programs, she decided to attend the Missouri School of Journalism. “That fit my needs perfectly – a graduate program that was not only academic in nature, but extremely practical,” Blount said. “It was going to prepare me for the job market.”

And it did. Blount took part in a sports internship at the Atlanta Journal-Constitution, who offered her a permanent position a couple months after she started. She later accepted a job at the Des Moines Register and the Minneapolis Star Tribune where she has covered a variety of sports since 1990. Blount has covered 10 Olympic games during her time at the Star Tribune. Inside Sports recently interviewed Blount. She discussed her journalism journey, advice she has for young journalists and more.

Inside Sports: How did the Missouri School of Journalism help prepare you for what you do now?

Blount: The Plan B in the master’s program was exactly what I needed. To me, it was absolutely wonderful to find a master’s program that recognized that not everybody wants to get a graduate degree in journalism because they want to teach or do something academic with it. There are people who go into the master’s program in journalism for a job in journalism. The practical experience that I was able to get from that, opposed to going to another J-School and simply doing an academic study and writing a thesis, was absolutely invaluable. The faculty there was terrific. George Kennedy was my reporting teacher. He is absolutely legendary at Mizzou. He was a very rigorous professor, but one of those guys who, years later, I remember things he told us and things that we learned in class. He was an absolutely wonderful reporting teacher. Probably the best thing I learned from him is: This is serious work. This is not easy. As we know, people now think, ‘Oh you have a smartphone and are now a citizen journalist.’ It’s about more than just asking questions. It’s about asking the right questions. It’s about digging. It’s about never taking ‘No’ for an answer. Those lessons just absolutely stuck with me. They were revelations at the time. You think sports journalism sounds great. Write some feature stories and it will all be fun and games. I got into it because it seemed like a fun job and, at Missouri, I learned what a serious job it is. A job that is so important to everything in our society. It can be fun, it has its moments of fun and you can write feature stories that are simply about somebody who is interesting. But so much of what we do is so important to the function of American democracy. Even in sports journalism, you might think ‘Well, that doesn’t apply to me.’ But it does in a way. When you go to Mizzou, you understand the importance of journalism. It is drilled into you. Even in sports, even if you are doing a light feature, I think what you learned at Mizzou about professionalism, about the function of journalism, about what it means to document history for your state, for your nation – all those things are always in the background, even if you aren’t thinking about those things all these years later. That was a big part of education at Mizzou – simply learning where journalism fits in our society, what it means to be a journalist, and what a serious responsibility it is no matter what you are covering.

Inside Sports: How have other people in the industry viewed your Missouri School of Journalism degree?

Blount: It is one of those things where, if you mention Mizzou, people’s faces light up. There is an instant recognition of credibility: If you went to Mizzou, you must be good. I have always found that that name remains the gold standard in people’s minds for a journalism education. So I have always found that it has probably opened some doors. It certainly gives you a lot of credibility when you tell people you went to Mizzou. People take that to mean this is a well-trained reporter.

Inside Sports: What advice would you offer aspiring sports journalists?

Blount: Understand that you’re not just getting paid to watch the games. We’ve all heard that, right? People say ‘Oh my gosh. Your job must be the greatest. They just pay you to go watch games.’ I think there are some people who are attracted to our industry who think that’s all it is and that you’re going to watch games, then tell people your opinions about it. No. That’s not sports journalism. That’s sports talking. That’s sports babbling. Sports journalism is actually a more serious pursuit than people give it credit for. I would say my No. 1 piece of advice is to understand that when you become a sports journalist, you aren’t simply going to games and giving an opinion. You need to analyze, you need to understand these sports extremely well. You need to ask difficult questions. You may need to dig into things. You may need to search public records if you are, for example, covering arena construction that the public is paying for or a possible academic scandal in college athletic departments. There are so many really serious things going on in sports. Sports is such a huge, huge part of our society and a multi-billion dollar business that, yes, it’s fun and yes, it’s exciting…and don’t lose the joy. That’s another piece of advice, too. Don’t ever become so serious about it that you lose the idea that sports is fun. That’s why we all get into it in the first place. But understand that serious journalism needs to be done in sports as well.

Blount: Maybe just the idea of the worth of sports journalism and that is is a broader, deeper pursuit than most of us give it credit for. When I was in school at Mizzou thinking about my career and sports journalism, I was looking at it as – how we all do – that this is going to be fun, and it is. Maybe, looking back, I wished I knew then how serious it was going to be because maybe then you take more classes when you have the opportunity in economics and things like that that would be valuable now for our understanding of sports.

Blount: Probably the first Olympic games I covered, which was 1998 in Nagano, Japan. I had always wanted to cover the Olympics. It is one of my favorite sporting events, probably my very favorite sporting event. I am also very interested in travel and other cultures, so the first Olympics I ever covered was just magical. Just incredible. It’s one of those things where you look around and think this is the coolest thing ever. This is what my whole career, up to this point, this is what I was building towards.