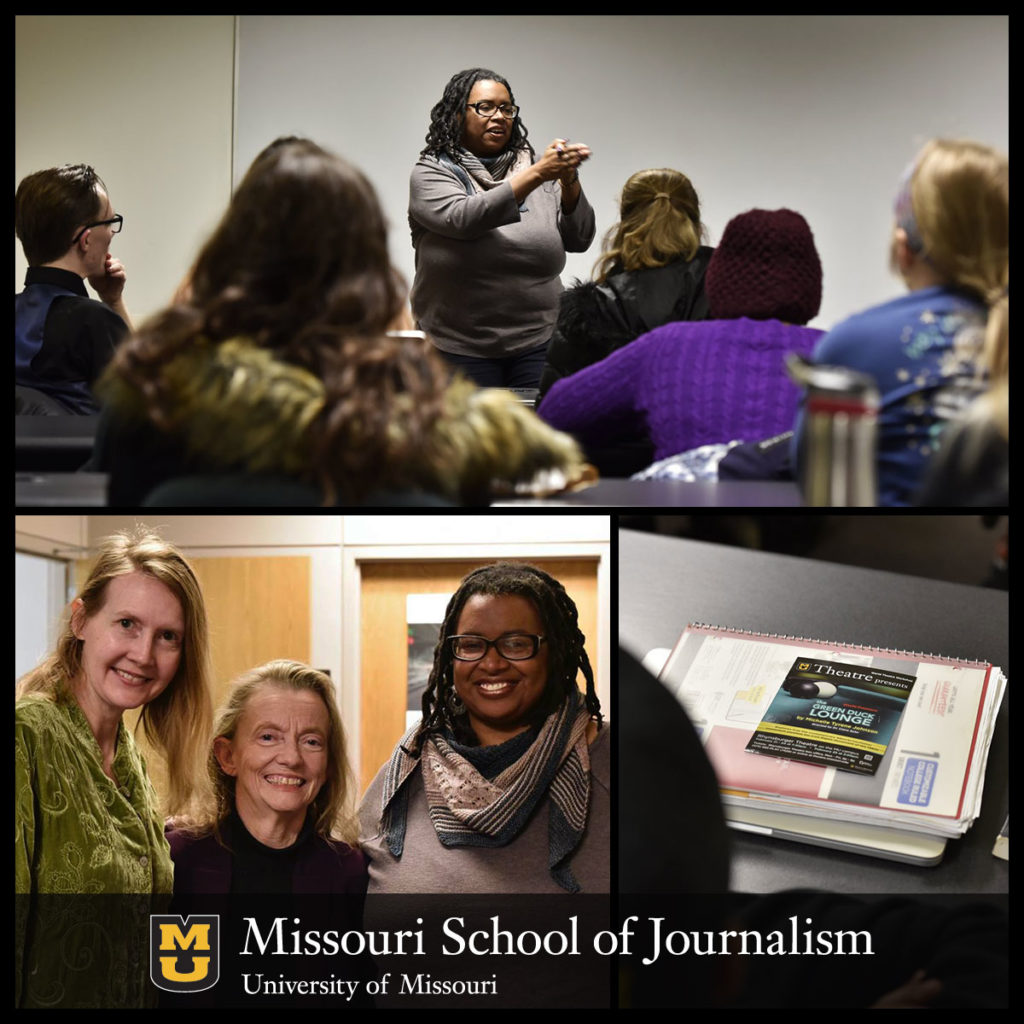 A collaboration of the Missouri School of Journalism and MU Theatre Department, “The Green Duck Lounge” performances can be seen at 7:30 p.m. Thursday, Friday and Saturday in the Rhynsburger Theatre at MU.

Columbia, Mo. (Feb. 23, 2018) — “Journalism exposes the wrongs in the world, but theater can make people care about them a little bit more,” playwright Michelle Tyrene Johnson told a Missouri School of Journalism class.

As part of her visit to Columbia, Johnson – a journalist and former attorney – spoke to the students about the play and the connection between journalism and playwriting. She also fielded student questions. She was joined by Janet Saidi, co-producer and former news director of KBIA-FM in Columbia. The play was directed by Claire Syler, assistant professor in the MU Theatre Department.

The play tells the story of Leon Jordan of Kansas City, Missouri, a civil rights activist, state legislator and police officer, who was murdered in 1970 outside the Green Duck Lounge, which he owned. According to publicity materials, Johnson’s play “explores how the contemporary #BlackLivesMatter movement parallels the civil rights movement of the 1960s.”

Performances continue through Feb. 25. The students were asked to attend a performance and write a critical review of it.

“I think one of the big things that I’m excited about is seeing how [Johnson] takes on those issues,” says senior Kayla McDowell, who is studying magazine editing.

The students also have the opportunity to participate in the talk back event, which immediately follows the play each night. A panel of activists, journalists and scholars, including Associate Dean for Graduate Studies Earnest Perry, discuss with the audience the issues addressed in the play.

“I think one of the most valuable aspects of this play is the exchange or talk back after the performance,” says Heiss. “How many times do students and the public get the opportunity to ask the playwright about the history, motivation and characters in a play? Not often. This is a rare chance for the community to witness an imaginative reconstruction of an event – and then connect it to present issues.”

The play premieres at a time when racial issues remain a topic of conversation in Missouri and the nation.

“I immediately wanted this to be a play and a conversation that would not only take place on MU’s campus and in Missouri but would be hosted by MU,” Saidi said in an email. “[It’s] a way to learn more about present activism through the history of activism and mainly to change the narrative about protest. It doesn’t have to be seen as a disruption, it can be seen as progress, as history in action.”

Other Missouri School of Journalism students are producing video and social media content to support the play, says Mike McKean, associate professor and facilitator of the Media of the Future initiative for Mizzou Advantage.

“The Green Duck Lounge” performances can be seen at 7:30 p.m. Thursday, Friday and Saturday in the Rhynsburger Theatre at MU. There is a matinee at 2 p.m. on Sunday. Mizzou Advantage and the MU Division of Inclusion, Diversity and Equity provided funding for the production of the play.