The contest, which accepted entries in the form of visual art or creative literature, was created to encourage creative exploration of diversity on campus. Journalism students won all five of the awards in the visual art category and two of the five awards in the writing category, for a total of seven of the 10 awards overall. The pieces were all responses to this year’s question: What shapes your identity?

Prizes in each category were $300 for first-place winners, $200 for second-place winners and $100 for third-place winners. The students were honored at an awards ceremony on Tuesday, April 14 at the Reynolds Alumni Center.

First Place: Sequoyah Moore, a junior, is from Edmond, Oklahoma. She is studying strategic communication. Moore described her work as a “photographic design piece about America’s history of dehumanizing and killing black bodies.”

Second Place: Mollie Barnes, from St. Louis, is a senior studying multiplatform design. Her work is an acrylic painting with mirror. “As a woman, my identity is mainly judged off of my emotions, which are seen only as a manipulative tool and not valid on their own,” Barnes said. “Many times when people see me or my emotions, they only see a version of themselves. Sometimes people call me crazy because I am not feeling the way that they want me to feel, so in order to not come across as crazy I have to censor my feelings. This painting was a way for me to portray that fragmented feeling.”

Third Place: Shelby Kardell, a native of St. Louis, is a senior studying photojournalism. She shot her piece with a Nikon camera at Bull Shoals Lake in the Ozark Mountains. “I believe the photo encapsulates the feeling of fluidity we all experience as we mature,” Kardell said. “It captures my sister, Darci, as she felt at the transitional age of 19 going on 20.”

Exemplary Entry: Nate Compton is a freshman journalism major from Shawnee, Kansas. “I submitted a photograph, a self portrait actually, and wanted to portray how we hide our identities behind society’s standards of normal,” Compton said. “Society has more of a masking effect on people than we realize. If we are all striving to be that ‘perfect’ standard of normal or of beauty, or whatever society is throwing at us, then we hide the parts of ourselves that are different. And with that, we are hiding our true selves.”

Exemplary Entry: Natalie Kirst is a junior studying strategic communication from Madison, Wisconsin. She created her piece using Adobe Illustrator. “Everything from my friends, family, the place where I grew up and everything that is to come shapes my reality, as depicted in this illustration,” Kirst said.

Second Place: Savannah Miller is a junior strategic communication major from Southlake, Texas. “The piece I wrote is sort of a plea for people to be kind to one another, and to learn to accept and cherish differences,” Miller said. “To write the vignette, I drew on my experiences of growing up in a very wealthy, very white suburb of Dallas and watching my aunt and uncle raise a child with autism in a similar community. I hope that what I wrote speaks to different people in different ways, but I also hope that it universally encourages love and acceptance.” 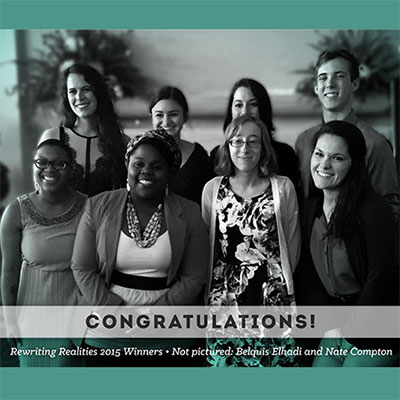 Exemplary Entry: Ross Earley, a freshman studying journalism, is from Dallas. “‘Handle With Care’ was inspired by the people who have shaped my identity, such as family and friends, for, even in spite of their few mistakes, they cared enough to try to build me up into the man I am today,” Earley said.