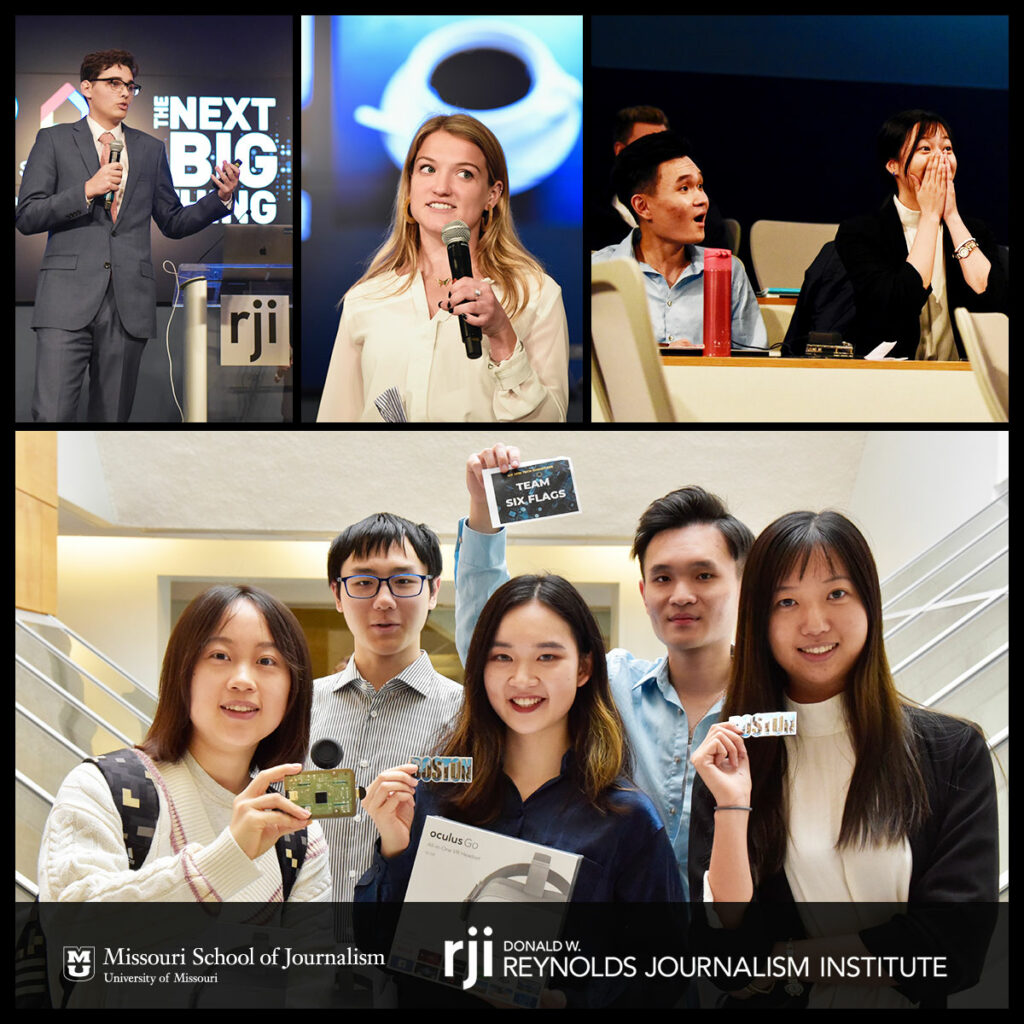 The members of Team Six Flags (at bottom) won this year’s RJI Student Competition by developing NewSnooze, which utilizes Raspberry Pi and the Google Assistant system to deliver local news and advertising, weather, and traffic information as its users wake up.

Columbia, Mo. (April 30, 2019) — A smart alarm clock that delivers local news and advertising, weather, and traffic information as its users wake up is the winner of the 2019 RJI Student Competition.

A team of students from the University of Missouri developed NewSnooze, which utilizes Raspberry Pi and the Google Assistant system. The competition brings together journalism, engineering and business students to tackle a journalism challenge.

Once the alarm clock goes off, the user can verbally tell Google, “Hey Google, give me more time.” The Google Assistant system responds with, “OK, while waking up…here’s what you might want to know,” and then begins sharing personalized information. The snooze feature continues to feature local news and advertising until the user tells the system that they’re awake.

The team would eventually like to include a feature that would monitor sleep patterns and wake a user up during a time of light sleep to provide better rest for the users.

The team saw a need for a device in the market that would provide both local news and events and offer a sleep monitoring function, said member Ningyuan Hu.

The hope is that NewSnooze will help users wake up right away. Snoozing can be unhealthy in that it cuts into a person’s sleep cycles and going back to sleep tells the body to start a new sleep cycle, according to Robert Rosenberg, medical director of the Sleep Disorders Centers of Prescott Valley and Valley and Flagstaff, Arizona (“Is the snooze button bad for you?“).

“I’m someone who hits the snooze on my alarm a lot, and I think that product could really help me in terms of getting more sleep and also being educated about what’s happening in the community at the same time,” said judge Wendy Lee, a Los Angeles Times reporter.

The team also demonstrated that local deals and promotions could be intertwined with the morning stream. The team surveyed 50 local businesses about advertising and learned that 81 percent would be interested in smart home advertising. Lee said she was impressed by the students’ level of research.

Hu said the students ran into their share of challenges and successes.

“Every time we felt like it was the learning process,” Hu said. “We learned new stuff every day. That was meaningful. We have to keep learning in our future job. It makes me want to learn forever.”

Danting He, who is minoring in technology education, added, “this project absolutely got my skills put into practice and [and now I] know why I need it – that minor – and why it’s important and where I can go in my future career.”

Next steps for the team include a trip to Boston later this year where they will meet with media and technology experts and leaders. All teams received an Oculus Go VR headset.

This year’s challenge was to make news more accessible in the smart home by using Internet of Things technologies including single board computers like Arduino, Raspberry Pi or voice computing tools such as Amazon Alexa.

“Better News for the Smart Home was our theme this year and Missouri journalism, business and engineering students brought their best ideas forward,” said Ebony Reed, student competition co-coordinator and director of innovation and the RJI Futures Lab. “The students’ enthusiasm and creativity was evident in their ideas and desire to help move journalism forward for news producers and consumers on smart and connected devices.” Reed served alongside Senior Editor Kat Duncan, who was also co-coordinator of the competition.

The other teams in the competition included:

The students presented during the RJI Tech Showcase, which demonstrated technology and journalism projects at the University of Missouri, and featured a keynote speech from Wendy Lee.

The RJI Student Competition is a collaboration between the Donald W. Reynolds Journalism Institute, Missouri School of Journalism, MU College of Engineering and the University of Missouri Trulaske College of Business.