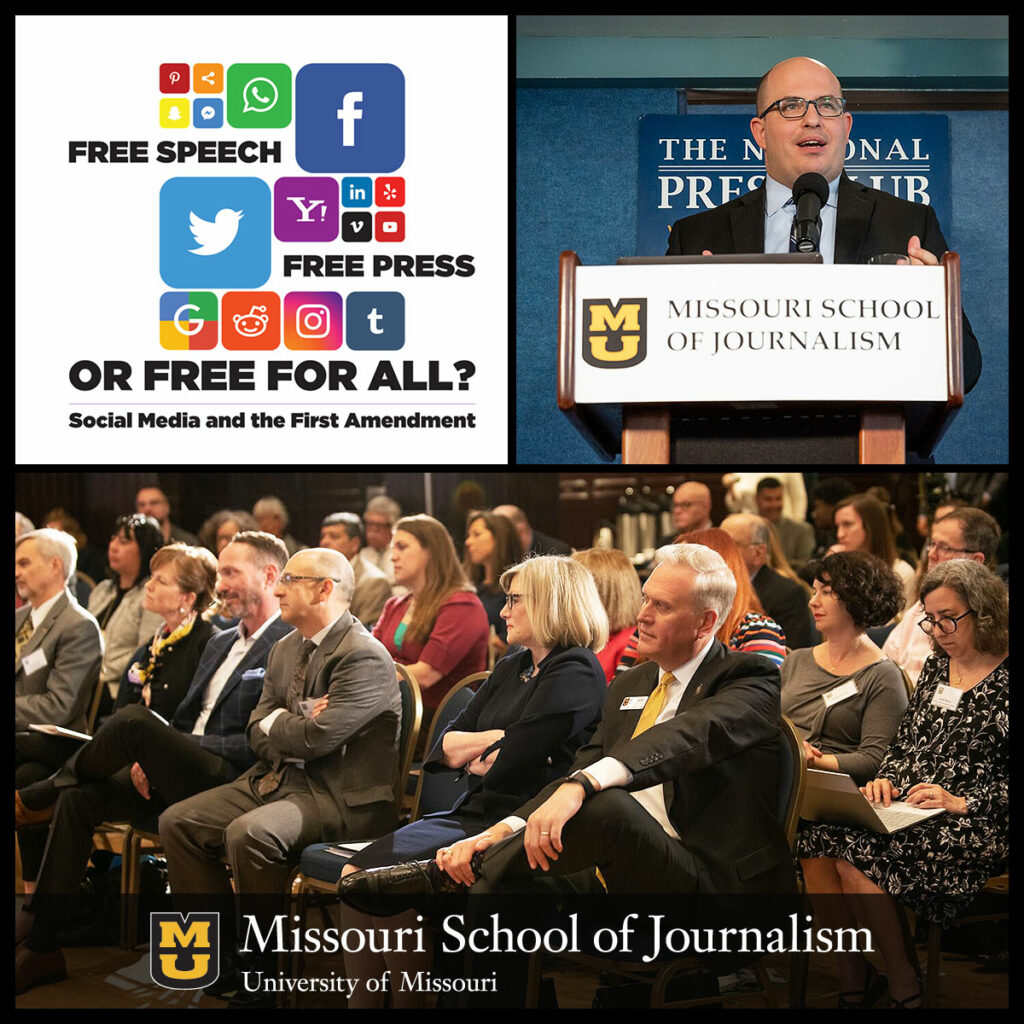 Washington, D.C. (April 30, 2019) — First Amendment advocates and social media observers acknowledged at the Missouri–Hurley and Price Sloan Symposium that the journalism and legal sectors are walking a tight rope.

“We are having a reckoning about big tech that is overdue,” said Brian Stelter, the chief media correspondent for CNN Worldwide and anchor of “Reliable Sources.” “I do believe our news ecosystem is stronger than it was years ago thanks to this technology. We need to center our conversation about where people are getting their news.”

Cecilia Kang, national technology correspondent for The New York Times, provided insights about the revelation that Facebook is preparing for a multi-billion dollar privacy fine from the Federal Trade Commission. “This case is bigger than Facebook; it’s a blueprint for how other social media companies are viewed and monitored going forward. The U.S. government is starting to draw lines and regulate social media companies.” She added that Facebook is unable to monitor content right now, despite its use of artificial intelligence and human reviewers.

Andrea Matwyshyn, professor of law at Northeastern University, said, “We don’t want to damage the free flow of information and certainly we don’t want to discriminate on the basis of content.”

The symposium, “Free Speech, Free Press or Free for All? Social Media and the First Amendment,” was held at the National Press Club.

“Two-thirds of Americans get news from social media, but more than half say they expect it to be inaccurate,” said Barbara Cochran, the Curtis B. Hurley Chair in Public Affairs Journalism at the Missouri School of Journalism and the event organizer. “We just saw challenges to free speech this week when the government of Sri Lanka shut down social media platforms after the horrific attacks in their country.”

Sam Halabi, director of the Center for Intellectual Property and Entrepreneurship and associate professor of law at the University of Missouri School of Law, posed questions during the legal panel that highlighted the spectrum of opinions.

George Washington University Regulatory Studies Center Research Professor Jerry Ellig pointed out that the public gets frustrated when government steps in and tries to impose its solution. Cybersecurity law expert Jeff Kosseff said that the courts have decided that social media platforms can’t be held liable for posted content; he notes this is a sweeping immunity with few exceptions, as platforms are allowed to make these decisions.

The editor of PolitiFact, Angie Drobnic Holan, explained how its Facebook fact-checks identify fake information on the platform with “Pants on Fire” designations when necessary. Yet she added that Facebook hasn’t provided the data to allow for an evaluation of its effectiveness.

James Warren is executive editor of Newsguard, which has trained journalists to assess news websites for credibility and transparency; it also awards badges for each site of green for reliable and red for unreliable. “We hope there is a market for knowing if we should trust a site…we’ll find out,” he said. “In Europe, they are more active on this front. We are hoping instead of government regulation that they will partner to license our product.”

Ellig believes it should be enough for platforms to disclose their privacy rules; if they are violated, then users could seek legal remedies. Yet journalists shared disturbing social media abuse they have faced as working professionals. Some have found ways to cut off abusive users, or, alternatively, have reached out to such users for a dialogue.

David Vladek, former director of the Bureau of Consumer Protection at the FTC, gave an overview of how the commission is limited in its ability to police violations of consumer protection provisions; it can go after shady used car dealers, but the regulations haven’t caught up to the social media age.