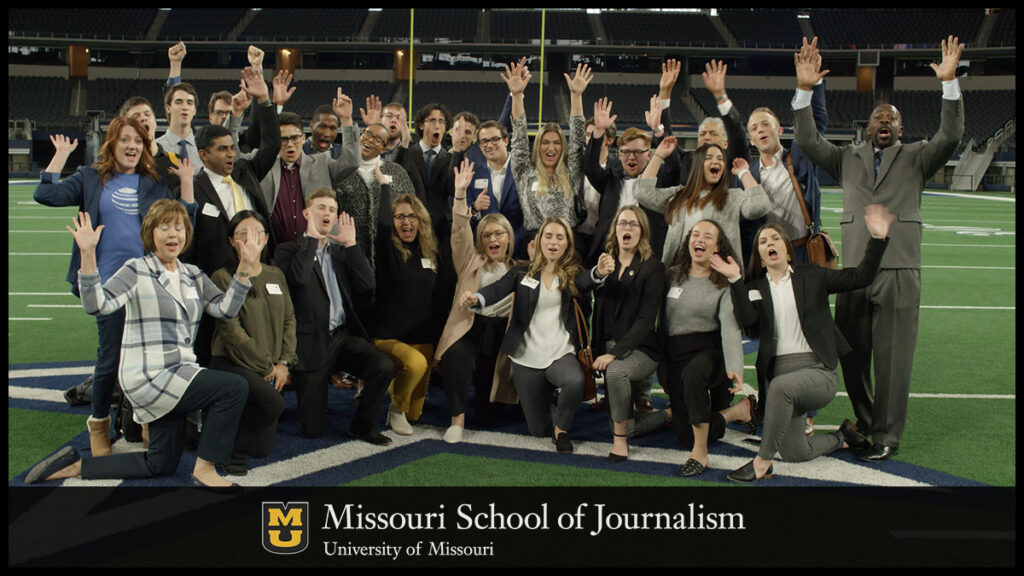 Columbia, Mo. (May 18, 2020) — On May 4, Missouri School of Journalism students, joined by peers from Business, Engineering and Department of Architectural Studies, virtually presented their 5G solutions to real-world problems in front of AT&T executives. These presentations were the product of a semester’s worth of hands-on learning, including a trip to Dallas this spring where students were immersed in AT&T’s work environment.

MU faculty, in partnership with AT&T, began planning this class in August 2019. “The idea for the class was to throw together a team of divergent interests and leverage their ideas against a problem,” said Jim Flink, associate professor of strategic communication and the Journalism School’s representative on this initiative.

The students formed multidisciplinary “snap” teams that tackled problems in one of four areas: stadiums/esports, health care, campus safety/security and academics. For much of the semester, the teams performed primary and secondary research, which included talking with campus departments about their problems and needs.

For their final presentations, the students were welcomed by MU President Mun Choi; Trulaske Dean Ajay Vinze emceed. The judges included MU’s Provost Latha Ramchand and Vice Provost for Undergraduate Studies Jim Spain, along with three executives from AT&T: Vice President of Retail Sales Distribution Kelly King, Senior Vice President of Delivery and Assurance Excellence Chad Townes, and Vice President and General Manager Alyson Woodard. Sixty-eight participants from MU and AT&T were in attendance. The healthcare team was the one selected as the “winner” by the judges, but those in attendance were impressed by everyone who presented.

“It’s a messy world,” said Solomon Davis, a strategic communication student and member of the campus safety/security team. “How can we seamlessly, automatically and cost-effectively make sense of data and alert students and faculty of security threats? That’s what my group was focused on.”

For the campus safety/security team, threats meant anything from active shooters to sidewalks that haven’t been salted yet.

“In the real world, it’s rare to work with groups of people from the same discipline,” said Flink. “That’s why this class was such a great learning experience. Engineering students learned how to break down jargon for Journalism students, and vice-versa, which is something everyone needs to be able to do to collaborate in a diverse professional setting.”

“I’ve always had an appreciation for journalism students,” said Davis. “But now I have first-hand appreciation of just how talented the entire student body is. Working together, Mizzou students can accomplish problems no individual could.”

This class is a small part of a broader partnership between MU and AT&T. “By next January, the hope is that Mizzou is home to a 5G millimeter wave laboratory where students from multiple disciplines can combine their skill sets to incubate the ideas of the future,” said Flink.

The 19 students that participated in this inaugural class are: