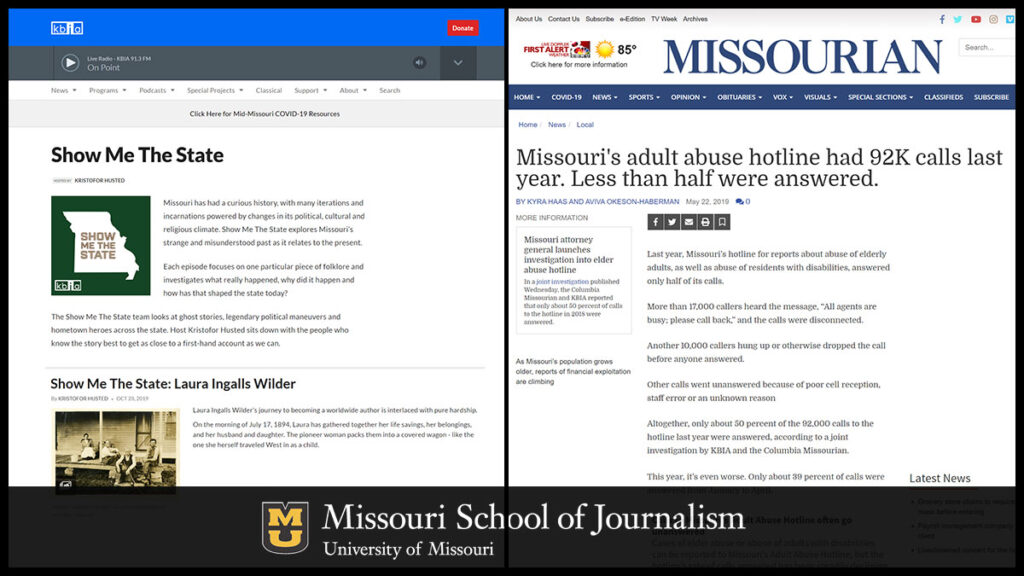 KBIA-FM’s “Show Me The State” podcast and the station’s health-related news coverage recently won several national awards and its report on Missouri’s adult abuse hotline – a collaborative project between KBIA and the School’s community newspaper, the Columbia Missourian – won two.

“Show Me The State,” which explores Missouri folklore, won the third-place National Headliner Award for Best Information Podcast. The award is presented by the Press Club of Atlantic City.

“The podcast is very intentional about making these historical stories relevant today,” said Ryan Famuliner, associate professor and KBIA news director. “Each episode helps listeners understand why the state – and the country – are the way they are today through the lens of these stories.”

KBIA professional staff, including host Kristofor Husted and Assistant News Director Janet Saidi, provide editorial oversight for “Show Me The State,” according to Famuliner. “But the student producer of each episode is the one doing the lion’s share of the research and reporting,” he said. “Each student is only assigned to focus on one episode for the entire semester as either a capstone or a requirement of their three-credit-hour Advanced Audio Producing coursework.”

“The Gay Purge” examined University of Missouri efforts to root out “gay activity” among students and faculty in the 1940s and 1950s. The episode, produced by graduate student Madison Conte, won the following awards:

“The Legend of Doc Annie,” which was the series’ first-ever episode, explored the true story of a woman who performed illegal abortions in the 1930s in Poplar Bluff, Missouri. Jamie Hobbs, BJ ’19, produced this episode, which earned the following awards:

Earlier this year, “The Legend of Doc Annie” was recognized with two regional Edward R. Murrow Awards, which are presented by the Radio and Television Digital News Association. “The Gay Purge” received a certificate of merit from the Missouri Broadcasters Association.

“We truly think that every episode of the show is every bit as good as these two, even if they are about Jim the Wonder Dog or the failed Disney park in Marceline, Missouri,” said Famuliner. “All of the episodes are created with the same care and expertise, and all of them help you understand Missouri by the end.”

All 10 episodes of “Show Me The State” are available online.

“The elder abuse hotline story came out of the investigative reporting class, which included oversight from Sara Shipley Hiles, a faculty member outside of the KBIA newsroom,” said Famuliner. “Nathan Lawrence, then KBIA digital content manager, put in a significant amount of work making this a radio story, and his fingerprints are all over it as well.”

“Of course the student reporters – Aviva Okeson-Haberman and Kyra Haas – are the ones who chased the story and brought it into being. This project was the one that they poured most of their time into in that last semester [before graduation], when their skills were at a professional level.”

“Thousands call Missouri’s adult abuse hotline, but only some get through” by Okeson-Haberman and Haas, both BJ ’19, won the following awards:

Vox Magazine is an award-winning, cross-platform city publication where Missouri School of Journalism students, supervised by professionals, are the writers, editors, designers, photographers and managers. It keeps readers informed about what is happening and where to be in Columbia, Missouri. Vox publishes a monthly print edition and a website, providing insight on local news and culture. The print edition has a circulation of 10,000 and is distributed in the Columbia Missourian on the last Thursday of the month. It can also be picked up at drop locations around Columbia.