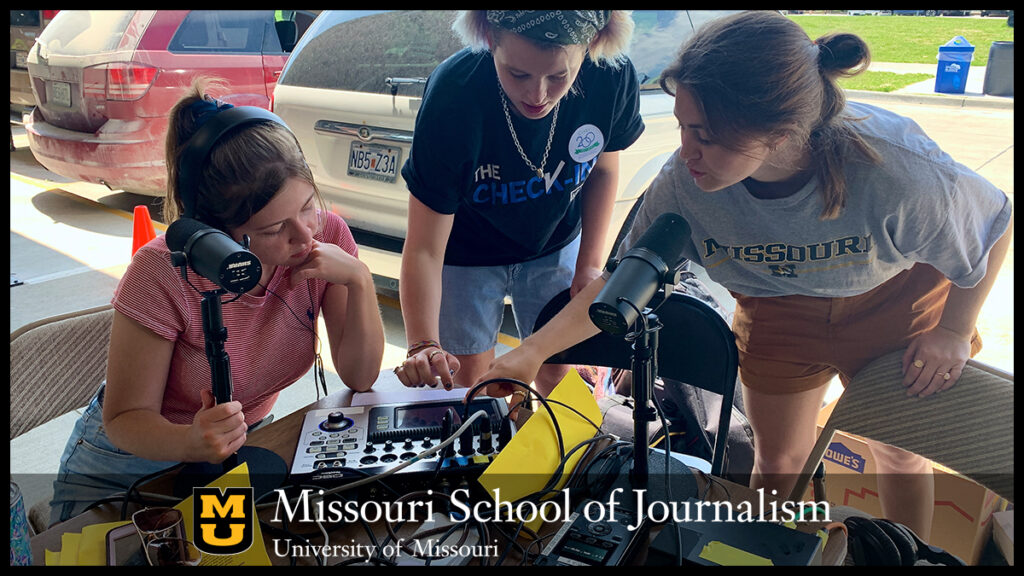 Emma Boyle, left, Becca Newton and Regan Mertz make adjustments to a sound mixer June 12 at the Columbia Farmers Market in Clary-Shy Community Park. The students are members of KBIA’s Missouri on Mic team, which is recording anecdotes from Missourians as part of the state’s bicentennial commemoration.

‘Missouri on Mic’ asks participants to share their thoughts about Missouri as part of the state’s bicentennial celebration.

They’re recording conversations for Missouri on Mic, a collaboration between the School’s NPR-member station KBIA-FM 91.3, The State Historical Society of Missouri, Missouri Humanities and the Ragtag Film Society.

Hook and a team of students travel to various locations with mixing boards, microphones and two portable audio booths.

“It’s very complex and it’s definitely interesting,” said Associate Producer Becca Newton, a rising senior from Eureka, Missouri, who’s on the project thanks to a summer internship scholarship from the St. Louis Press Club. “It’s definitely a lot of work to figure out exactly how the hardware works.” The system was designed by KBIA Chief Engineer Mark Johnson, who’s a telephone call away if the team runs into a technical issue in the field.

The twin audio booths sit on stands and enclose the visitor from the shoulders up. Two people can recount stories simultaneously or — if the two are friends or family — communicate with each other during a single recording.

The team is responsible for setup and breakdown, transcripts, promotion and producing the final segments. Professor Kathy Kiely is a volunteer producer; Alicia Haywood is a consulting producer.

Past stops included the True/False Film Fest in May, the Columbia Farmers Market in June, and the CoMo 200 Celebration in July — all in Columbia, Missouri. The next stop is the Together for ’21 Fest, which is being held this weekend at the Center for Missouri Studies in Columbia. The team will visit Jefferson City for Statehood Day on Aug. 10 and the Missouri State Fair in Sedalia on Aug. 13.

For some of the students, this is their first opportunity to be out in the field since the coronavirus pandemic began.

“I’ve really loved being able to participate in the oral history aspect,” said Newton, who’s minoring in history, “so being able to have all of that combined and then be able to have these conversations with local people and learn a lot from them is great. I’m getting a lot of experience my first semester in the field.”

Students are learning “a myriad of things,” said Hook, including production and interview techniques. “They’re leading an interview and they’re leading a conversational-based interview. It flows a little differently than maybe a traditional two-way where they’re kind of handing over the mic a little bit.”

“I’ve definitely picked up on how to do more conversational journalism,” she said. “I’ve learned also just to have more of a conversation for an interview and not just to get all the questions and answers.”

Janet Saidi, KBIA assistant news director, said participants are asked to share their thoughts about Missouri, among other topics.

“What’s your life been like the past year? What do you think of Missouri? And what does Missouri mean to you? You get so many different kinds of viewpoints,” she said. “Basically, people are just telling us what’s on their mind. We get a range of experiences — very funny, quite, sad, and tragic experiences.”

The team returns to the KBIA newsroom after each outing with lessons learned.

“The main thing that we learned with True/False … was just how intimate and meaningful and powerful the discussion is,” said Saidi. “One of our first lessons was, ‘Wow, we need to prepare the journalists and producers who are doing these interviews.’”

Although there’s a list of questions inside the booth — and prompts from producers via headsets – some people already know what they’d like to share. “’I really want to talk about this’ and we’ll say, ‘Yeah, sure, go right ahead,’” said Hook. “We might even ask follow-up questions on that.”

The initial conversations usually last about 15 to 20 minutes, he said, but can go as long as 40 minutes. The students later edit them down to radio length, which is just under four minutes.

Edited conversations began airing last month on KBIA. On-air segments include music provided by The Burney Sisters, a local folk group. Each complete conversation will be archived at the State Historical Society.

“It’s been an incredible collaboration with the Journalism School and the University of Missouri to really get behind this moment in time,” said Pike. “Missouri on Mic is one of the more unique programs of our Missouri bicentennial. It’s allowing us to tap into Missouri here and now, tapping into what is it like to be a Missourian. When we look ahead 200 years from now, or a hundred years from now, they’re going to want to know what were Missourians thinking at 200 years?

“We’ve gone back into the archives to look and read newspaper reports during the centennial. It was really on the heels of the Spanish Flu, so very much like what we’re dealing with with COVID.” Therefore, she said, it’s important for “future scholars, educators, journalists to know exactly what our life was like now.”

Patricia McGowan visited the Missouri on Mic booth at the Columbia Farmers Market in June. Raised in Columbia, she said, she now lives in Oakland, California.

“I thought it was very good,” she said. “I thought they were very professional. They were well organized. I liked that they had the list of questions, so I knew what the interview questions would be. I thought the set up was good. The box all around my head, I could hear well.

“The student who was asking me questions, I would state my answer, and then she would comment on that before she asked the next question. So it was a nice way of doing an interview and that there was a little rapport between the person asking the questions and me.

“I’m really glad that the Journalism School is doing this.”

KBIA-FM 91.3 is mid-Missouri’s NPR-member station. It reaches 15 counties and has served mid-Missouri since 1972. KBIA is a university-licensed, community-supported not-for-profit institution, actively involved in the life of the mid-Missouri area. The station is the area’s largest provider of arts programming, serving more than 30,000 listeners and members each week.