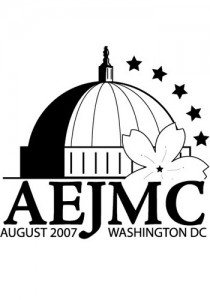 Columbia, Mo. (Aug. 30, 2007) — Missouri Journalism graduate students and professors showcased their scholarly work in 47 paper presentations and panel discussions at the 2007 meeting of the Association for Education in Journalism and Mass Communication, which took place August 8-12 in Washington, D.C.

Perhaps the most surprising award of the conference went to Yusuf Kalyango Jr., a doctoral student at the School. Kalyango forgot to note his “student” status on the title page of his submission and, as a result, actually received the second-place “faculty paper” award from the International Communication Division. Kalyango also received the Lionel C. Barrow Minority Doctoral Scholarship from AEJMC’s Communication Theory and Methodology Division.

In addition to the research by current students and faculty, alumni of the School’s master’s and doctoral programs participated in an additional 47 paper sessions or panel discussions. Top-paper awards went to seven graduate alumni as well.

“Missouri is the incubator of the best and brightest minds in journalism and mass communication,” said Margaret Duffy, acting associate dean of graduate studies at the School. “Every summer, AEJMC is an important opportunity for our students and faculty to celebrate their accomplishments, exchange cutting-edge ideas with other experts and recharge for another year of fast-paced research.”

The AEJMC Photojournalism Division recognized Zoe Smith, professor of photojournalism at the School, during the conference for her contributions to the field of visual communication, scholarship and service to the division.

‘To the Detriment of the Institution’: The Missouri Student’s Fight to Desegregate the University of Missouri Aimee Edmondson, doctoral student; and Earnest L. Perry Jr., MU journalism professor

Media Effects on Russian Students in the Perception of the United States of America Anastasia Kononova, doctoral student

Securitization: A New Approach to Framing and Media Portrayals of the ‘War on Terror’ Fred Vultee, doctoral student

The Debate Over Section 230: Balancing Responsibility and Free Speech on the Internet Jonathan Groves, doctoral student

Let the Sunshine In, or Else: Examining the ‘Teeth’ of Open Government Laws (Third-Place Student Paper) Daxton Stewart, doctoral student

Selling an Issue: The Presence of Issue Stories on Covers of City and Regional Magazines Teresa Weaver, master’s student

Global Journalism Ethics at the Turn of the 20th Century? Walter Williams in the ‘World Chaotic’ Hans Ibold, doctoral student

A Battle of Visions: Dramatistic Images of the Missouri 2006 Senatorial Campaign Janis Teruggi Page, PhD ’05, now at the University of Florida; and Margaret Duffy, acting dean of graduate studies

Commission on the Status of Women

The following alumni of the Missouri Journalism master’s and doctoral programs also presented papers or spoke on panels at AEJMC: