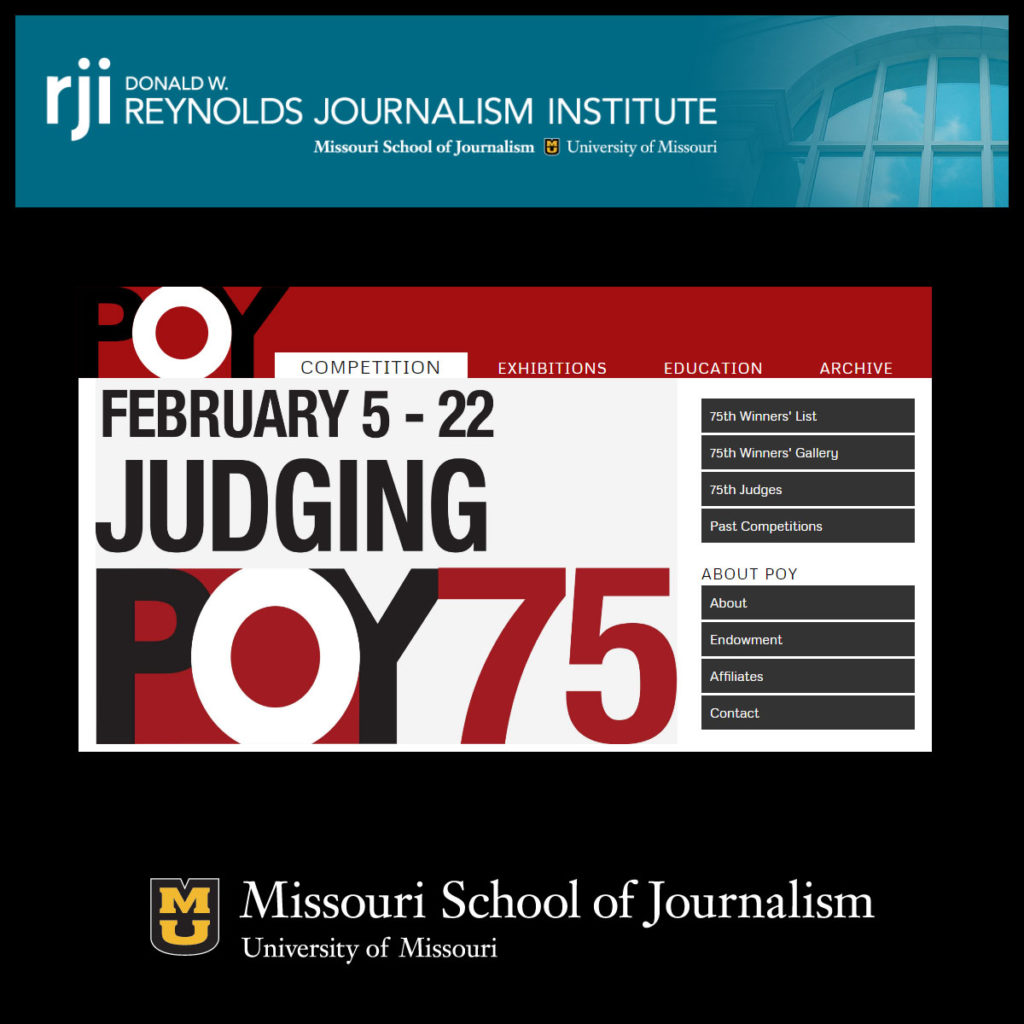 Winners have been announced for the 75th annual Pictures of the Year International competition.

Approximately 40,000 Images and Multimedia Projects Were Submitted from Nearly 100 Countries

Columbia, Mo. (March 2, 2018) — The judging process for the 75th annual Pictures of the Year International competition has been completed, and the winners announced. For 2018, nearly 40,000 images and hundreds of multimedia projects were submitted.

Every year, seasoned photo editors and photographers from around the world donate their time to review every entry over a three-week period of judging. The process is an intense one, often described as “thrilling but exhausting.”

For the first time, POYi held the majority of its judging via Facebook Live. The broadcast reached nearly 600,000 people, and more than 130,000 online visitors have watched the videos created from the judges’ discussions, still available on the Pictures of the Year International Facebook page.

For incoming director and University of Missouri alumnus Lynden Steele, BJ ’94, POYi provided an opportunity for a return to familiar territory: “I volunteered with POYi as an undergrad and have watched the contest as a professional evolve over the years,” said Steele. “My favorite part of POYi is when the judges talk about the entries with each other. They bring real insight to bear on the work. I’ve been working as a photographer and editor for about 25 years and, after watching and listening to the judges, I can say I’m a better editor now than I was a month ago.”

POYi judges selected nearly 200 winners across 36 categories, with work ranging from a single photograph to long-term multimedia projects. A complete listing of all categories and winners is available by visiting the POYi website. Prizewinners of note include:

Pictures of the Year International will be celebrating its 75th year with an exhibit opening at the Newseum in Washington, D.C., on Friday, April 6. The exhibit will run through Jan. 20, 2019. A photo day, including speakers and activities, will be held at the Newseum on Saturday, April 7.

About POYI
Created in 1944 at the Missouri School of Journalism as The First Exhibition of Spot News and Feature Photography, founder Cliff Edom intended to recognize newspaper and magazine photographers on the World War II home front. It has since evolved into an international competition with more than 40,000 entries annually. It became affiliated with the Missouri School of Journalism’s Reynolds Journalism Institute in 2008. Ethical visual reporting and in-depth storytelling are the hallmarks of these awards, with an educational program that consistently represents “the gold standard” in photojournalism. POYI receives financial support from RJI and photographers, editors and publications who enter the annual competition as well as the POYi Endowment.

About RJI
The Missouri School of Journalism’s Reynolds Journalism Institute opened its doors in 2008 with the mission of strengthening democracy through better journalism. It serves as a research and development hub for the Missouri School of Journalism and forms close collaborations with industry partners that often leverage the enthusiasm and expertise of students and professors. RJI serves as the headquarters for the Pictures of the Year International competition.