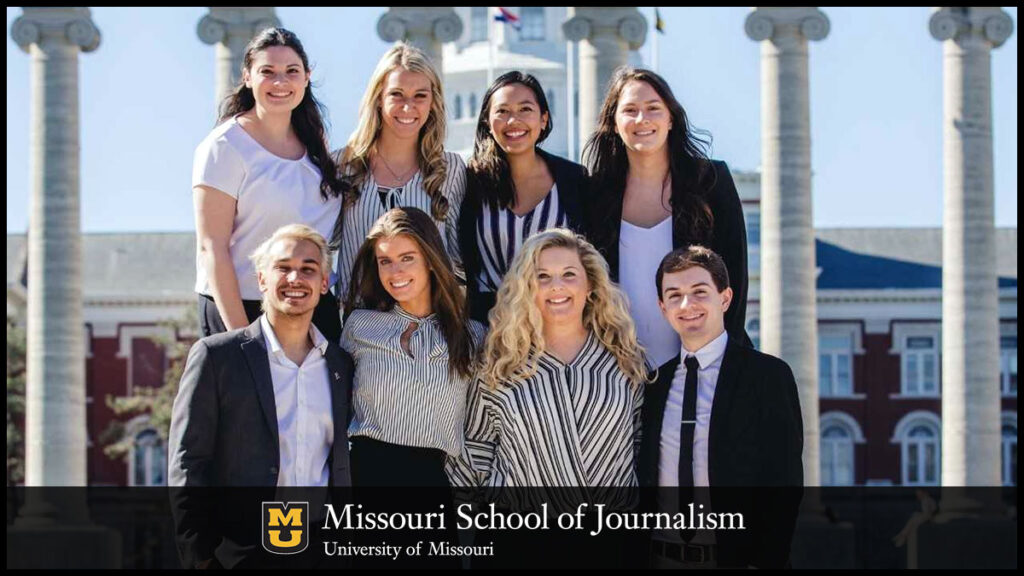 Columbia, Mo. (July 2, 2019) — Before they can graduate, all strategic communication seniors have to complete a capstone. They have two options to choose from: MOJO Ad or AdZou.

Each capstone option involves the same purpose: helping a real-world client solve a problem. While MOJO Ad students took on the task of creating a campaign for Chevrolet in spring 2019, some 28 AdZou teams consisting of 211 strategic communication seniors tackled creative marketing and advertising campaigns for 18 different local and regional clients, such as Boone Hospital Center, Fox Sports and MU School of Law.

One client, the Southeast Missourian newspaper, was particularly impressed with the work that their assigned group of J-School students presented to them. The team, which named themselves Backslash, was tasked with the goal of increasing subscriptions for the newspaper in Cape Girardeau, Missouri.

Backslash worked under the guidance of their lab instructor, Jim Flink, who saw the goal as a significant challenge, but was impressed with his group’s determination from the outset.

“I’m here to give them honest feedback and help steer things in the right direction when I feel like they made a wrong turn, but this group was so eager to get going and enthused about their work that we never had any major issues,” Flink said.

Every capstone project starts with a client briefing, where the team sits down with the client. At this meeting, the client provides the team with their goal and the team can ask the client all the questions it has, from what the budget for the campaign is to what the client has already tried to address their stated problem that may not have worked in the past. Flink sensed a palpable excitement in the initial meeting that gave him a hint that this group would likely be very successful. “In the initial meeting there was some tension, but that’s to be expected,” he said. “What really stood out was how the students hit it off with the client. They made it seem like they really wanted to help the client out, and I think that really reassured the folks at the Southeast Missourian.”

Primary research revealed that although that same sentiment rings true within the Cape Girardeau area, the newspaper is still a revered institution within the local community. The people by and large showed no interest in seeing the newspaper go away, they just did not feel obligated to pay for it.

From that point, the team had to get creative in terms of what big ideas they suggested the client implement. One suggestion was to take events that the newspaper already sponsors within the local community and more aggressively put the Southeast Missourian’s name on it, so the community is made more aware of the newspaper’s commitment to local events and institutions, such as a local music festival and SEMO Ball sports banquet. Research showed that some in the community were not aware of the extent of the paper’s philanthropic efforts, so this branding could raise awareness and perception of the paper.

An additional suggestion the students made was to offer a payment plan through which readers could pick and choose what elements of the paper they were willing to pay for. As a result of this limited subscription, readers would pay a reduced rate, which research showed readers were more likely to be willing to do. A third suggestion the students made was to consider building the cost of subscriptions into their other successful products.

The group also boosted the paper’s social media presence and revamped the website to make it more mobile-friendly. While the client was very impressed with the work that the students presented, the students seem to have benefited from the experience as much as the client.

“I really enjoyed communicating with the client, as they were excited to work with us and valued our opinions even though we were still students,” said Kelsey Bekermeier, the team’s account executive. “I was so motivated to produce my best work knowing that the Southeast Missourian would actually use our work and tactics to increase subscriptions to their paper. I learned how to properly communicate with a client, communicate well with my team and present it well to a client.”

The account planner, Alex Ring, stressed the valuable lessons that the experience taught him. “Everything needs to be backed up by research, and that’s something I maybe wasn’t as aware of going into this. As fun as it is to go out on a limb with a really creative idea for your client, it doesn’t mean much when you present it to them if you can’t back it up with findings from your research,” he said.

The Southeast Missourian looks forward to implementing several of the team’s suggested tactics, and has already pulled in $5,000 in revenue through an indirect partnership such as the team proposed.