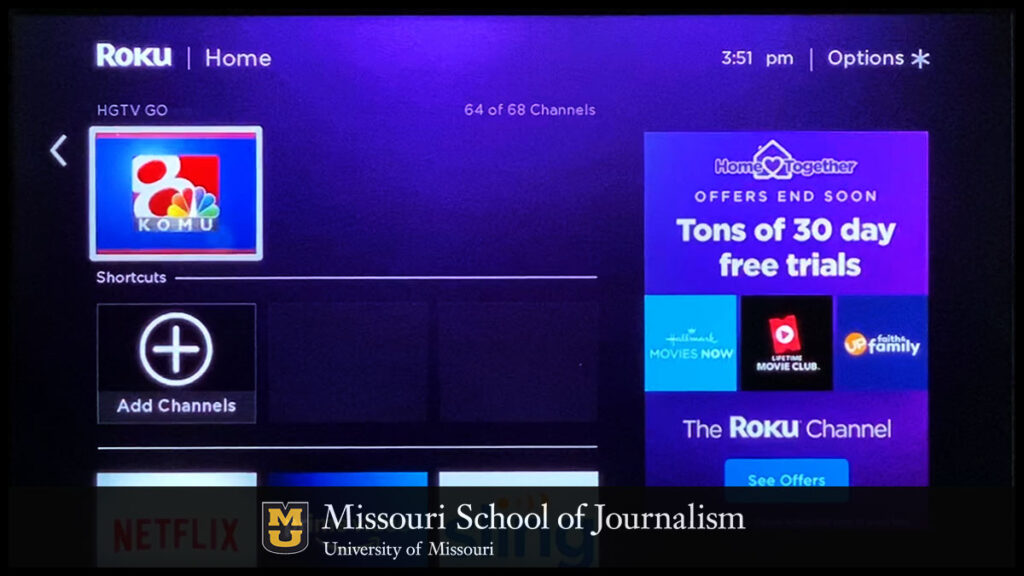 KOMU-TV, an NBC affiliate in Columbia, Missouri, is now available on the streaming platform Roku. KOMU is the only university-owned commercial major-network affiliate in the United States that serves both an academic and a commercial mission.

The commercial television station and NBC affiliate shares tips and insights for launching.

Columbia, Mo. (June 29, 2020) — As they seek to expand their audience reach and capabilities, staff at Missouri School of Journalism’s KOMU-TV, an NBC affiliate in Columbia, Missouri, announces the station’s presence on the streaming platform Roku.

With the launch, the station live-streams its newscasts directly to the platform, which has close to 40 million active users. In addition, Roku provides an archive of the latest newscasts for viewers to watch, as well as the most recent forecasts and other news stories on demand.

The Missouri School of Journalism’s other newsrooms – including the Columbia Missourian, Vox Magazine, NPR-member affiliate KBIA-FM and the Jonathan B. Murray Center for Documentary Journalism – have begun to provide content to the streaming service. The effort demonstrates the journalism school newsrooms’ commitment to collaborate and pool resources as a local media hub, says Matt Garrett, general manager at KOMU.

“We really wanted to create the shelf space,” says Garrett. “We’d worked on this long enough, it was time, and we just needed to get it out there in front of people so that people could sample it.”

What they’ve learned and their advice for others

When it came to incorporating Roku into the news station’s workflow, the CMS provider eased the process of launching and streaming on the platform, says Garrett. Through their existing CMS, they are able to easily populate the app’s various “swim lanes” with video stories, weather content and more.

A third party vendor helped the station integrate its livestream newscast on the channel.

There were some expenses required to launch on the Roku channel. However, the station anticipates being able to recoup those expenses through advertising sales and branded content, a new type of content to the station.

The Roku platform allows the station to insert platform-unique commercial breaks for the on-demand newscast. They will insert advertising as pre- or-post rolls for on-demand content.

One of the biggest challenges the station faced when launching on Roku was determining what content to stream, Garrett says, but they reminded themselves of the advantages that a streaming platform offered that traditional news broadcasts don’t.

“We can’t be everything to everybody, but we want to give ourselves flexibility to pivot when we need to,” says Garrett. “That’s key right there, the ability to go live. The one thing we keep reminding ourselves is that, on this app, we’re not constrained by time like we are in a traditional broadcast. We have the ability to do something that’s outside the normal broadcast model.”

It’s crucial to begin discussing the topic of content from the very beginning, said Alicia Haywood, visiting assistant professor at the Missouri School of Journalism and creative and content specialist for the project.

“Everything about building a channel should be centered around content first, not last,” she says. “It is impossible to build any sort of logical or efficient strategy for a channel without factoring in long-term content production capabilities and resources. You are inviting failure if content discussion for a new channel are forced to begin with, ‘Well what do we have?’ instead of ‘What do we want and need this channel to be?'”

Haywood strategized with a group of students at the Missouri School of Journalism to come up with content ideas and asked various questions:

Although they are in the beginning stages of studying the platform’s analytics, Haywood says they are pleased to confirm substantial interest and curiosity so far. The challenge will be to maintain this initial interest as they continue to build the platform, she says.

“This channel introduces an opportunity to deepen KOMU’s relationship with its existing audience while starting new relationships with those who are not broadcast viewers,” says Haywood. “The flexibility of the OTT platform allows us to tell more stories. The viewers get more and can experience the content at their convenience, which we know is a critical factor.”

KOMU-TV is inviting audience feedback from those who engage with the channel. Roku viewers can find KOMU’s contact info through the settings page. The team plans to integrate a QR code to make it even easier for viewers to open up a message window where they can share their comments, questions and ideas, says Haywood.

One of the biggest lessons Haywood has for newsrooms is to not be afraid to experiment with newer technologies and platforms like Roku.