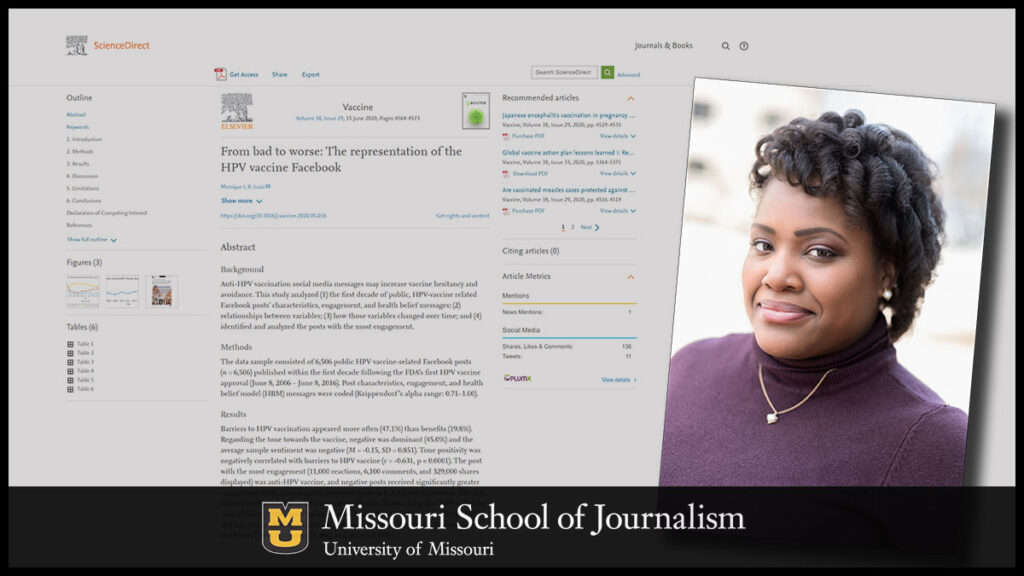 For a recently-published study, Assistant Professor Monique Luisi studied more than 6,500 public HPV vaccine-related posts on Facebook over the first 10 years since the vaccine was approved by the U.S. Food and Drug Administration.

Columbia, Mo. (July 8, 2020) — One of the biggest social media sites – Facebook – has allowed “anti-vaxxers” to gain a stronger voice against the use of the human papillomavirus, or HPV, vaccine, according to a new study from a media expert at the University of Missouri.

Monique Luisi, an assistant professor in the Missouri School of Journalism, studied more than 6,500 public HPV vaccine-related posts on Facebook over the first 10 years since the vaccine was approved by the U.S. Food and Drug Administration in 2006. The Centers for Disease Control and Prevention estimates that approximately 80 million Americans are infected with HPV, and 14 million new cases occur annually. HPV is also associated with genital warts and six types of cancer in men and women, including cervical and throat cancer.

Despite the vaccine’s reported benefits of preventing multiple cancers and genital warts, Luisi said 45% of the posts she identified displayed a negative tone toward people getting the vaccine. In addition, over the course of a decade, Luisi identified a negative trend occurring on Facebook toward how people perceive the vaccine – including its safety, effectiveness and whether its use leads to the encouragement of sexual behavior.

“The representation of the HPV vaccine has not only worsened, but negative posts toward the HPV vaccine have received more public engagement, and evidence shows that these negative posts have generated momentum for other related negative posts,” Luisi said. “It would be one thing if we only saw just the negative information out there. But there’s also negative momentum carried by these posts, and if negative posts are encouraging more people to post other negative content, then we can predict how the conversation is going to go and that people are also being influenced by the messages they see.”

Luisi said her next step for this research will be to study the implications this content has on parents and guardians as decision-makers. She said it’s important for people to recognize the power of sharing content on social media.

“People talk about a lot of things on social media,” she said. “While someone might not be directly involved in a conversation on a particular topic, they still might see that conversation while scrolling through their social media. Therefore, I think it’s important to think about intent when sharing content. Even the simple act of sharing – intentional or unintentional – can influence others.”

The study, “From bad to worse: The representation of the HPV vaccine Facebook,” was published in Vaccine, a journal that publishes content related to the field of vaccinology from various disciplines.