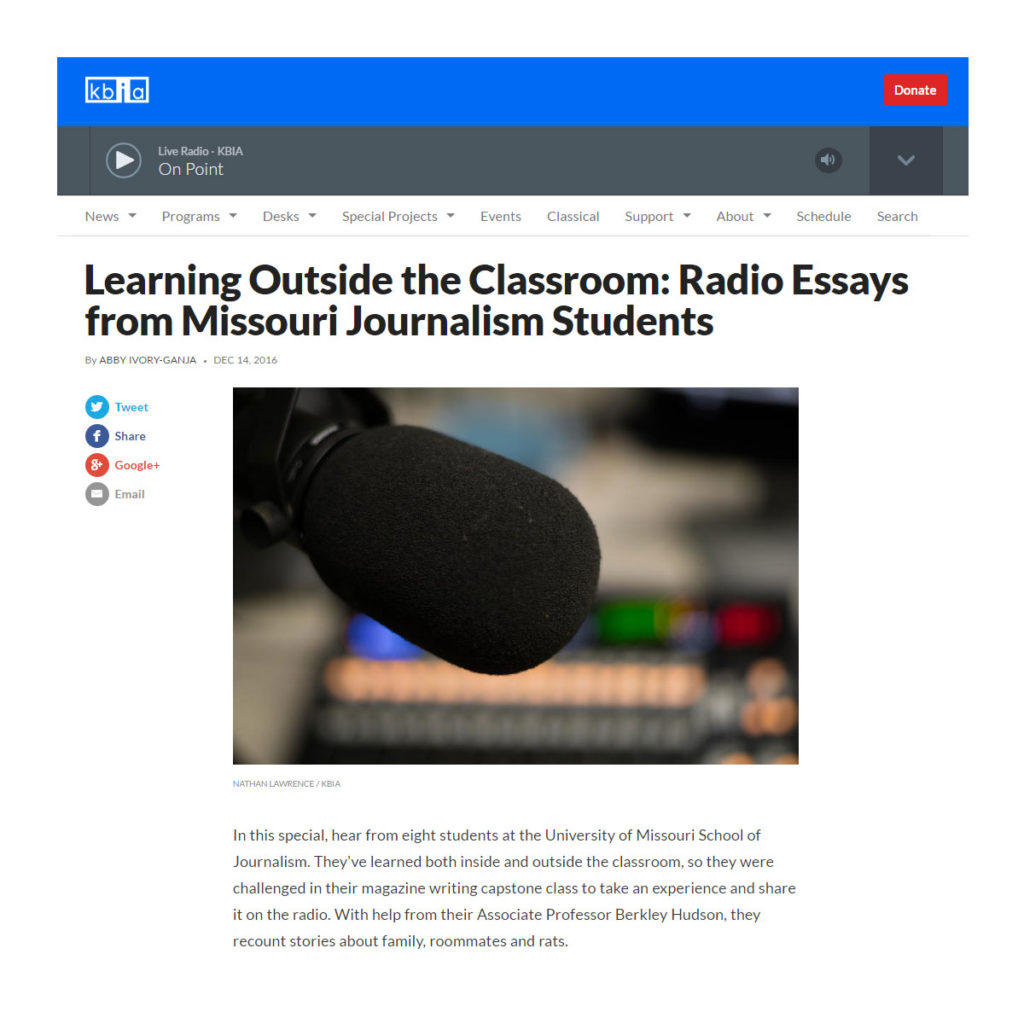 Columbia, Mo. (Dec. 19, 2016) — Eight Missouri School of Journalism magazine journalism students learned how to tell their stories with the spoken – not written – word in the fall Advanced Writing capstone class.

Now available for listening on KBIA-FM, the students – six seniors and two working on their master’s – each share a personal story that proved to be significant in their lives. Among them are:

The characteristics of a great magazine story – voice, dialogue, sense of place, character, telling detail – are all elements that are part of a compelling and entertaining radio commentary, said Associate Professor Berkley Hudson, a member of the Magazine Journalism faculty who taught the course.

The assignment teaches students how to write what Hudson calls “tight.” Their radio essays will take about three minutes of air time, or about 500 to 600 words. By comparison, a longform magazine article online or in print can run as many as 3,000 words or more.

“As emerging magazine writers, editors and publishers, the students need to become comfortable when speaking into microphones for interviews as they become leaders in journalism. Writing and ‘voice-ing’ radio commentaries prepare them for that,” Hudson said.

The convergence of magazine writing and radio journalism is one example of the emphasis on converged projects across the newsrooms at the School, according to Assistant Professor Ryan Famuliner, a member of the Radio-TV Journalism faculty.

Eventually, Blakely and Hudson solicited help from Maeve McGoran, the commentaries editor of National Public Radio‘s “All Things Considered.” McGoran, who then was based in Kansas City, regularly came to Blakely and Hudson’s classes as a guest editor to critic the students’ drafts. Now, for the past few years, Famuliner, who also serves as KBIA’s news editor, has served in that guest critic role.

“I love watching and hearing the students start to find their voice in their piece and in performance,” Famuliner said. “And the result is always some really good radio.”

Abby Ivory-Ganja served as the student producer, coordinating the recordings with Hudson’s students and producing the essays into a 30-minute segment.