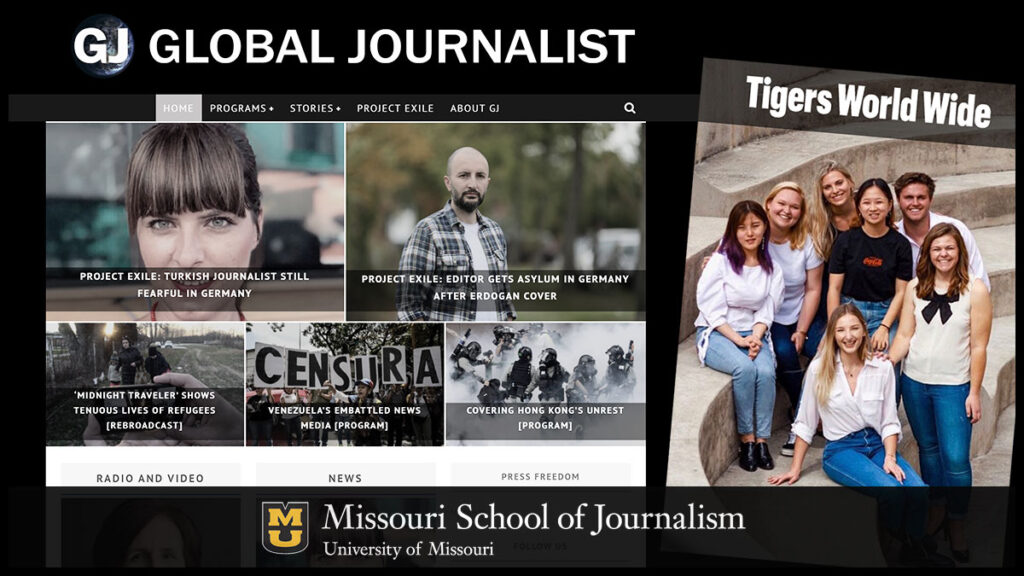 Columbia, Mo. (June 10, 2020) — When Global Journalist (GJ) first began airing on the radio in 2000, the internet was in its infancy, and mostly an afterthought to broadcasters. Things have changed in the ensuing years and GJ’s current executive editor Kathy Kiely understands the landscape is shifting.

“GJ is eat-your-spinach journalism,” she said. “Something that I’ve been thinking about a lot is how do we get young people to pay attention to it without using clickbait, and how do we reach them on their preferred platforms.”

“The first thing we had to do was find our target audience,” said Amy Hanks, TWW’s public relations specialist. “From there, we were able to form our research questions and come up with our big idea.” TWW defined its target audience as “international investigators” – journalism students at the top five journalism schools in America that want to know the facts but don’t want to be told what to think.

Before team members began work on this project, no one on TWW knew of GJ. “Once we were assigned to GJ, we started listening to old recordings of their programs and were impressed,” said Courtney Yerganian, TWW’s digital specialist. “We were all frustrated with ourselves and couldn’t understand how we had never heard of it before.” This instilled confidence in TWW that younger people would be receptive to GJ’s content if they could be made aware of it.

TWW spent months conducting primary and secondary research to form a strategy that could help GJ amplify its reach. The team sent surveys out to students at journalism schools across America and the results revealed a powerful insight. Sixty-eight percent of “international investigators” surveyed by TWW “do not trust news, period.” However, 53% of those surveyed were interested in expanding their news consumption. This contradiction excited the members of TWW because it showed that most of its target audience has an appetite for news, but isn’t satisfied with the usual options.

“The research showed us that there was a need for objective journalism,” said Hanks. “It was up to us to figure out how we can make people aware of GJ’s ability to fulfill that need.”

TWW’s recommendations included increasing GJ’s marketing effort, making students the stars of the show, shifting from broadcasting to podcasting and using social media platforms as a place to distribute news and drive traffic to GJ’s website and podcasts.

“It didn’t make sense to me that I had never heard of GJ before,” said Yerganian. “We wanted to target the top five J-Schools in the nation, but that starts at home.” To increase GJ’s name recognition at the Missouri School of Journalism, TWW mocked-up promotions to be displayed in the Reynolds Journalism Institute.

“We wanted people at Mizzou to pay attention to GJ,” said Hanks. “But, we also wanted GJ to attract the J-School’s best talent to join its class.”

Since GJ began airing on the radio, a professional anchor had always been the show’s host. TWW felt that allowing students to lead the show would serve the dual purpose of attracting talent and advertising the show. “If my friend was hosting a show, I would want to listen to it,” said Yerganian. “Our feeling was that the students hosting the show would let their friends know and unintentionally help spread the word.”

Kiely loved the idea. To test it out, student journalists made some prototype content that was released on SoundCloud.

“Making students the stars of the show gives us an opportunity to switch away from live-to-tape to a post-production format,” said Kiely. “This makes it easier for us to make a high-quality show without having to trust that we will always have a perfect Skype connection, or that there won’t be a significant language barrier.”

At the same time GJ is shifting away from a live-to-tape format, it’s also shifting into the podcasting space. This shift agrees with the survey results from TWW’s primary research that showed that “international investigators” use podcasts as a way to follow the news, whereas they avoid the radio altogether.

The survey results also revealed that the majority of GJ’s target audience goes to social media for its news first, before traditional mediums like TV, magazines or newspapers. “Going forward, we are going to post content to our social media accounts. That sort of functions as the lede of a story,” said Kiely. “This will give our followers the nuts-and-bolts of our stories and hopefully will encourage them to check out the full episode.”

The fact that GJ is implementing so many of TWW’s recommendations is a testament to the hard work the group put in last spring.

“I was really thrilled that the AdZou students I worked with were so committed and passionate,” said Kiely. “For students who think they may be interested in helping nonprofits, Global Journalist is a great starter class.”