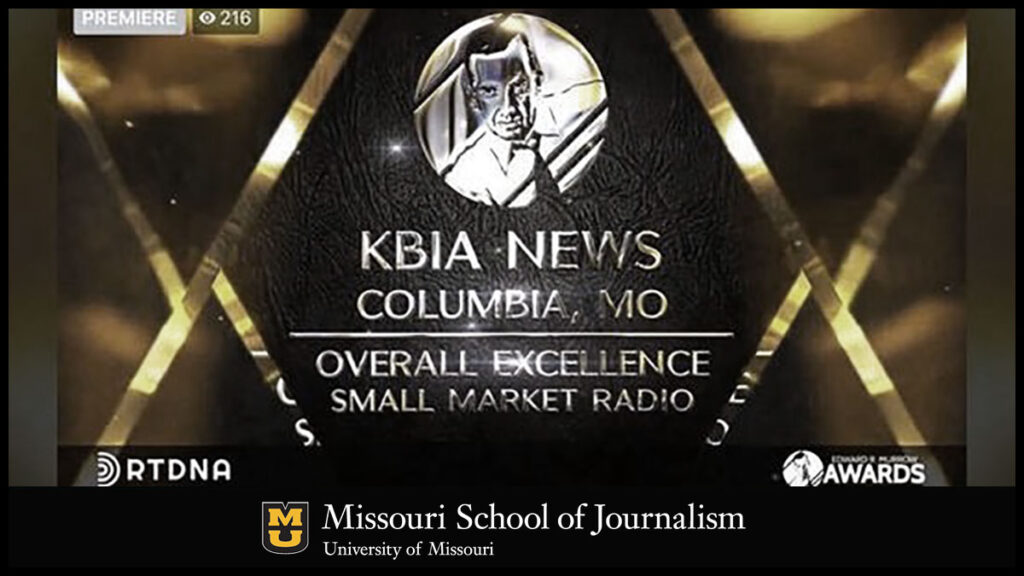 “This is a significant accomplishment for KBIA and the School of Journalism, as we are competing against professional organizations,” said David Kurpius, dean of the School of Journalism. “While the station has a history of earning many regional and national awards, this is the first time earning the overall excellence award. We are proud of our students’ accomplishments and recognize the work of our faculty and staff who lead by example, educating the world’s finest journalists today.”

KBIA, Mid-Missouri’s NPR-member station, is a hands-on training radio station for students studying at the Missouri School of Journalism. Students produce stories with audio, video and text for the website while also producing traditional radio newscasts and long-form stories.

The national awards were celebrated in a virtual ceremony Oct. 10, 2020. (Clips from the Overall Excellence award happen around the 31:00 mark.) The Overall Excellence entry included a variety of clips from 2019 including coverage of the Jefferson City tornado, investigation into the unanswered calls at the Elder Abuse Hotline, its talk show Intersection and more.

“The overall excellence award is a huge honor for our staff and student journalists,” added Ryan Famuliner, KBIA news director. “There is so much outstanding work being done at small market radio stations around the country, and it’s truly a shock to win this award competing against those outstanding outlets. And it’s important to note that much of the work that was included in the entry was produced and reported by students, who have a legitimate stake in this prestigious award.”

“Show Me the State: Legend of Doc Annie,” produced by Hobbs, was just one episode of the Show Me the State series, which “explores Missouri’s strange and misunderstood past as it relates to the present.” Students serve as the producers for the Show Me the State, working closely with host Kristofer Husted and other KBIA editors to research, report and write the pieces. They spend an entire semester working on one episode. During this time they utilize all the skills they’ve learned throughout their time working at KBIA.

“‘Show Me The State‘ is a challenging show to produce, because it’s largely a history program, and many of the sources and the people that knew them are long dead,” said Famuliner. “But this episode is really strong, because, without spoiling anything, there are some great sources with unique connections to Doc Annie, who lead the listener to a lot of introspection on the topics the piece covers.”

The national winners of the Edward R. Murrow Awards, a program that has been around since 1971, were chosen from the winners of the regional competition, which were announced in May. KBIA won eight regional Murrow Awards including Investigative Reporting, Multimedia and News Documentary.

Since 1972, KBIA has served mid-Missouri with the best in public radio service. KBIA is now on the air at 91.3 FM in mid-Missouri and 89.7 FM in Kirksville, and streaming online worldwide, seven days a week, 24 hours a day to its listeners and members. KBIA is a University-licensed, community-supported not-for-profit institution, actively involved in the life of the mid-Missouri area. The station is the area’s largest provider of arts programming, serving more than 30,000 listeners and members each week, and is today one of the few remaining providers of local news. KBIA provides the best in NPR news, information, and arts and entertainment programming to this growing and vibrant area.