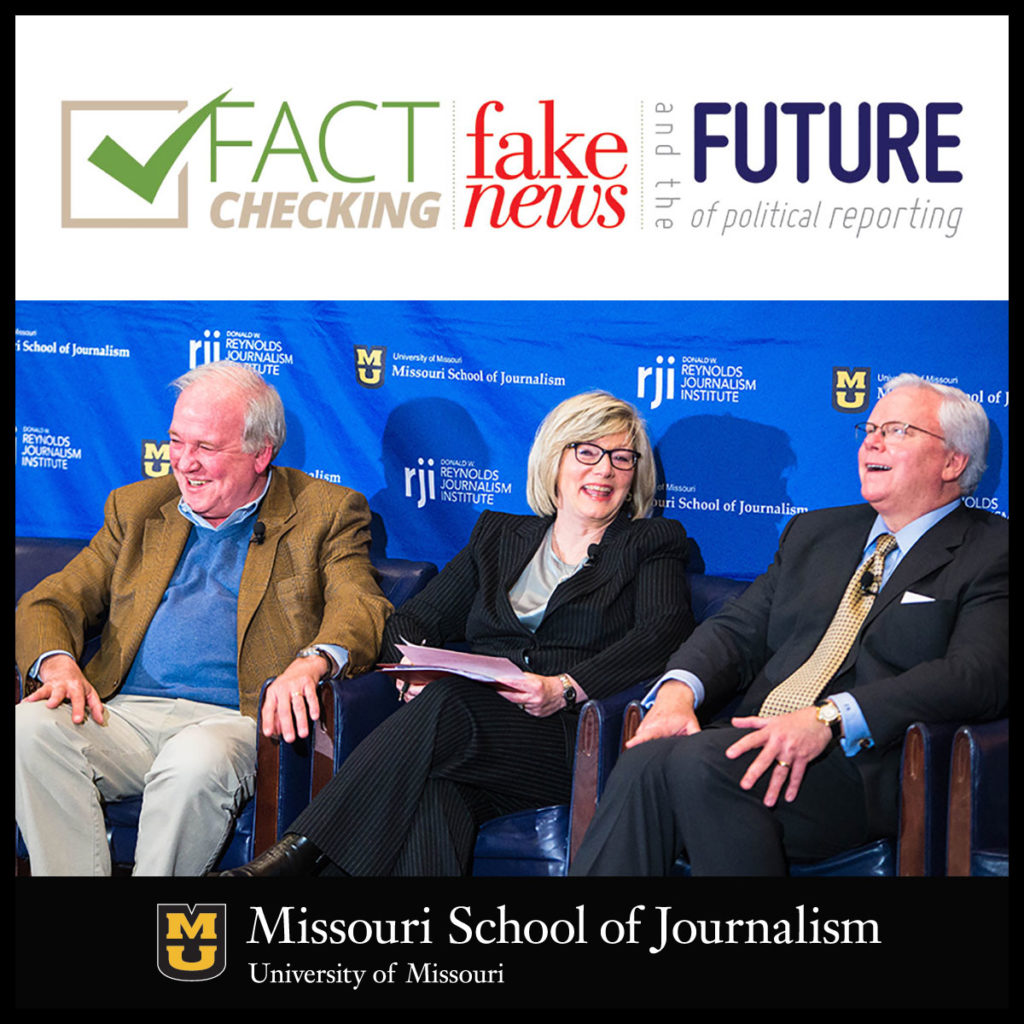 By Adam Aton and Jieyang Zheng

Washington (March 20, 2017) — Two former White House officials, a Democrat and a Republican, believe the Trump administration has been hampered in getting its messages out by the rapidly evolving media environment and a president who likes to tweet.

Mike McCurry, press secretary to President Bill Clinton, and Ed Rogers, a political strategist for presidents Ronald Reagan and George H.W. Bush, discussed how to manage that increasingly chaotic landscape during the Missouri-Hurley Symposium March 9 at the National Press Club. Barbara Cochran, the Curtis B. Hurley Chair at the Missouri School of Journalism and director of the school’s Washington program, moderated the discussion. The Missouri-Hurley Symposium was sponsored by the school, the Reynolds Journalism Institute and the National Press Club Journalism Institute.

The fragmentation of the media and proliferation of news organizations are major factors contributing to the increasingly frequent clashes between the press and the administration, both said.

According to Rogers, the situation was different in the Reagan and Bush eras: “There was a finite number of journalists that could change your day and alter the course of what the White House was trying to do or what message it wanted to maintain. They were available, predictable; there weren’t many surprises. All of that is wildly different today. Surprises can come from everywhere. There is an infinite number of journalists.”

McCurry has a similar view of the current environment.

“You had just a handful of networks, major wire services and daily newspapers that basically reached most of America,” McCurry said. “That was characteristic of political communication in the 1990s.”

But President Donald Trump seems to pose a unique challenge to his staff, Rogers said.

“I feel for them. It’s an awkward spot. The boss said something that is outside the norms of our agreed-upon level of deceit,” he said, clarifying: “You can say ‘We think things are going good here in the White House’ when you don’t think they’re going good. You can say, ‘The meeting with the prime minister was productive,’ when it was not productive.”

However, it’s a different matter for the president to say his predecessor ordered an illegal wiretap without offering any evidence, Rogers said, noting that such outlandish claims contribute to the flood of information that can leave the public – and reporters – overwhelmed.

“Message discipline has not been finely honed in the Trump administration,” Rogers said. Reagan, he added, was a very manageable president because he trusted his staff to give him good advice and direction.

Both agreed the White House’s daily briefing has morphed from a sleepy opportunity for clarifications into what McCurry called a “daytime soap opera.”

When the Monica Lewinsky scandal was cresting, McCurry recalled learning that CNN would be carrying the briefing live. He spoke to then-CNN President Tom Johnson.

“I called them up and I said, ‘Look, I will stipulate right now that I will not say one thing that will be newsworthy on that whole Monica Lewinsky business today.’ There was a long pause, and Tom said, ‘You don’t understand, we have 200,000 more households when you come on.’ They were going up against the soap operas, and I was more entertaining,” McCurry said.

But ultimately, Rogers said, that campaign-style messaging distracts from governing – comparing it to the difference between sword fighting and conducting an orchestra. And he believes campaigning against the press is even more corrosive.

While the media makes “a good ‘bad guy,'” Rogers said, calling the media the enemy of the American people increases distrust of the state of politics and decreases the credibility of information the public receives and the effectiveness of the Trump administration.

“It doesn’t serve any kind of net-plus for anyone’s interest,” Rogers said, “including the president.”

Press secretaries have two constituencies to please, the press corps and the president, and it’s rare to keep both happy at once, McCurry said.

“And that’s kind of metaphorically exactly this job,” McCurry said. “You’re caught between these two actors in this adversarial relationship. And if you cannot satisfy both sides, you’re probably not going to be very successful.

“If you’re not articulating the president’s point of view and representing his decision-making and his perspective effectively, you’re going to be in trouble with the president and with your colleagues.”

On the other hand, “the press corps needs to believe someone is looking out after their interests,” McCurry said. Sometimes that means other White House staffers will see you as too close to the press, he cautioned, “but that’s the job.”

When a Republican president takes office, the balance between the press corps and the president becomes even harder to manage.

Rogers said when he was working in the White House for President Reagan and President Bush, he felt mainstream media bias against the administration on a daily basis.

“We thought we perpetually had a head wind of biased liberal media that didn’t want to see success, had a bias to pull threads, to move stories on speculation,” he said. How often, he was asked. “Every day,” he replied.

“If there was a liberal bias in the press corps,” he said, “I wish it would’ve showed up more often.”

Rogers speculated that the rise of conservative-leaning media affects how the administration strategizes about getting its message out.

“No question, today’s White Houses – Obama, Bush, Trump – they feed their friends,” he said. “There is such a thing as friendly forums. You can go, you can shop around. You can get a collaborative environment that will nod in agreement. That’s new.”

If there is a bias in the press, McCurry said, it’s not ideological but a bias in favor of conflicts, tension and fallouts. That focus has undermined trust in existing institutions, he said, including the media.

“If we don’t trust the institutions that traditionally have been the things that hold us together as one people,” McCurry, “we are in very difficult waters.”

Adam Aton and Jieyang Zheng are graduate students at the Missouri School of Journalism. They are participating in the school’s Washington Program and will graduate in May.