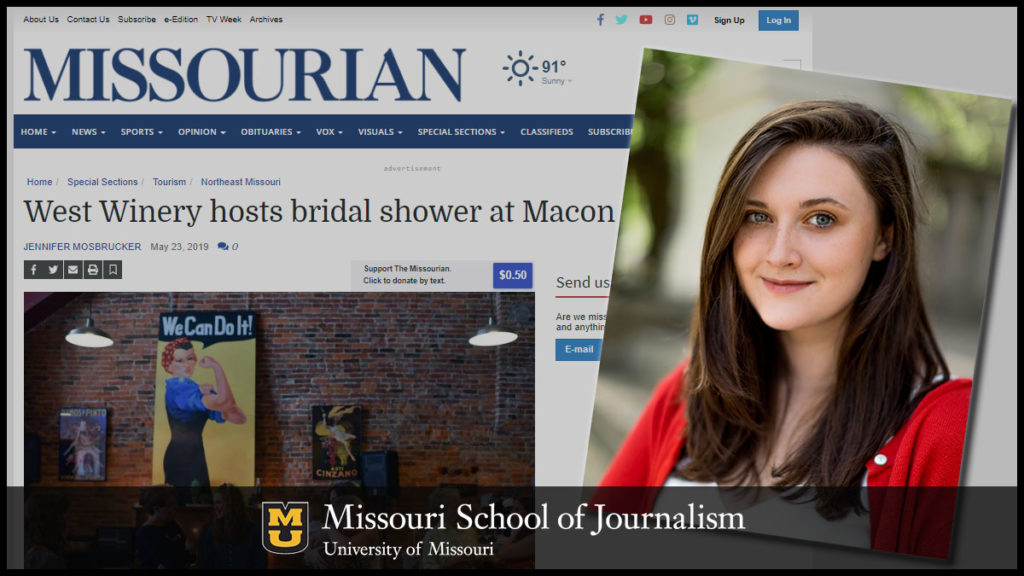 The program’s one-year, $12,000 stipend allows a recent graduate to delve deep into a reporting and writing project. During the next year, Mosbrucker plans to document the lives of those most impacted by Mississippi’s strained rural health care system.

“I plan on spending a year exploring Mississippi’s health care system, from legislators in Jackson, to rural hospitals on the brink and residents in vulnerable populations,” Mosbrucker said.

Originally from Goldendale, Washington, Mosbrucker spent most of her youth in Nevada, Mo. While at MU, she took classes in both journalism and health science and says she has always been interested in health care, but never certain how to combine her two interests.

That changed this past summer for Mosbrucker during a photo internship she had with The Commercial Dispatch in Columbus, Miss.

“During my internship I began to dig around for stories impacting rural communities in the area and that’s when I found a study from earlier this year reporting nearly half of the state’s rural hospitals were at risk for closure due to finances,” Mosbrucker said. “The more I researched the state’s health statistics, the more I wanted to hear about patients’ experiences.”

Mosbrucker plans to utilize multimedia reporting techniques – including text, still photography and video – to allow the discussion regarding policy to “stretch beyond the legislature to the people who are most affected.”

Here’s what Mosbrucker has to say about some of the stories she hopes to cover during her fellowship:

“I’m excited to have received the O.O. McIntyre Fellowship and spend the next year reporting on rural health in Mississippi,” said Mosbrucker. “My hope is that by showing the lives of those who are most impacted by a lack of accessibility, the work will build empathy and spark a conversation about possible solutions. This kind of in-depth reporting would not be possible without the support of this fellowship.”

O.O. McIntyre was one of the most widely known New York columnists during the 1920s and 1930s. His column, “New York Day by Day,” was syndicated to 508 newspapers in every state, Canada and Mexico. Born in Plattsburg, Mo., McIntyre was raised in Gallipolis, Ohio, where he got his start in newspapers as a reporter for $5 a week. McIntyre died in 1938, and his widow, Maybelle, left part of his estate to the Missouri School of Journalism. In her will, she established the O.O. McIntyre Postgraduate Writing Fellowship to help aspiring writers.