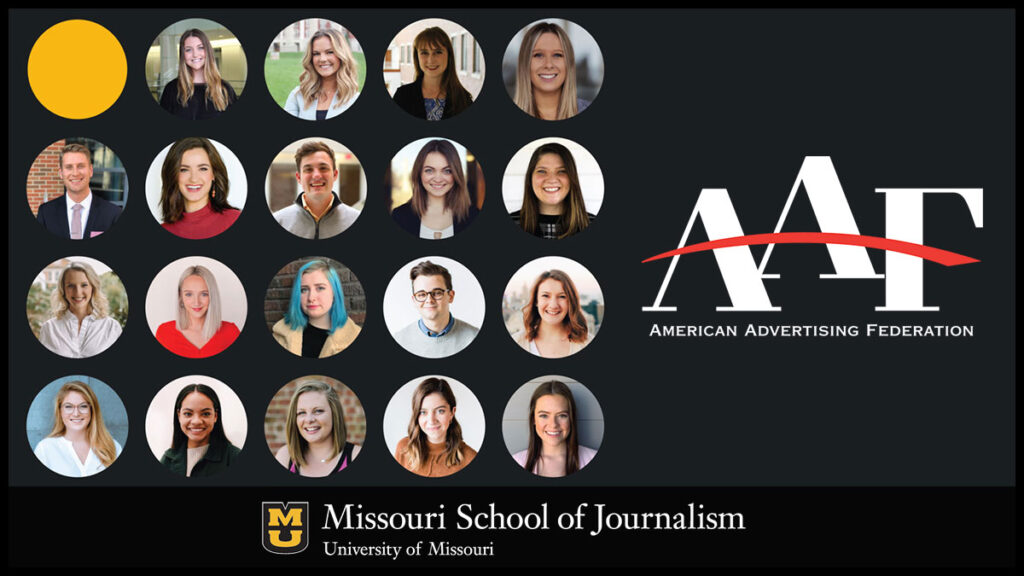 Columbia, Mo. (May 19, 2020) — The 2020 National Student Advertising Competition (NSAC) team at the Missouri School of Journalism is one of eight teams that has been selected to compete in this year’s national finals on May 20.

After missing out on last year’s national finals by a fraction of a point, this year’s team won District 9 for the third year in a row and re-established itself as a national contender after placing third in the nation in the 2018 competition.

NSAC is a student competition run by the American Advertising Federation (AAF), which is the nation’s oldest national advertising trade association. Students from colleges across the country compete against one another to develop an integrated advertising campaign for a real-world client. This year’s client was Adobe, a multinational computer software development company best known for its creativity software products. It challenged this year’s NSAC students to create a business-to-business campaign that highlighted its bundled adtech software, Experience Cloud for Advertising.

Higginbotham was proud of the 2020 team’s ability to adapt to unusual circumstances. In the competition’s 35+ year history, this was the first time NSAC prompted the field of competitors to create a business-to-business campaign. “Our strategic communication program orients students to work on direct-to-consumer campaigns. So this year’s team had to take their knowledge and translate it into an advertising environment they weren’t necessarily as familiar with,” she said. “Add in the technical nature of the product, and this campaign was definitely the most challenging one NSAC has ever given students.”

They also had to adapt to an ongoing pandemic. The University of Missouri announced its campuswide shutdown and transition to remote learning while the group was putting the finishing touches on its campaign plan book. “We were in class together when the news came, and initially we were pretty upset,” said Reed Wilson, the creative director. “We still had to put together our final presentation, but having the plan book finished a week ahead of schedule helped us stay calm.”

Wilson worked closely with Isabella Mangan, the team’s account executive. In the fall, Mangan’s team of an account planner and four brand strategists did the primary and secondary research that formed the foundation of the creative work. In the spring, Wilson’s team of designers, copywriters, media planners, digital strategists and a video producer executed the creative campaign work. “We had our different roles, but everyone contributed to everything,” said Wilson. Altogether, Mizzou’s NSAC team put eight months of work into this campaign.

“In the beginning, we spent a lot of time getting to know each other and assessing everybody’s strengths and weaknesses,” said Mangan. “Once we figured out how to maximize everybody’s strengths, it was off to the races. For me, the most fulfilling part of this whole experience was watching everybody rise to the challenge and grow their new talents.”

“Resilience is the No. 1 adjective I think of when I think about this group,” said Higginbotham. “When MU went remote they Zoomed and emailed their way through it, and the quality of their work never faltered.”