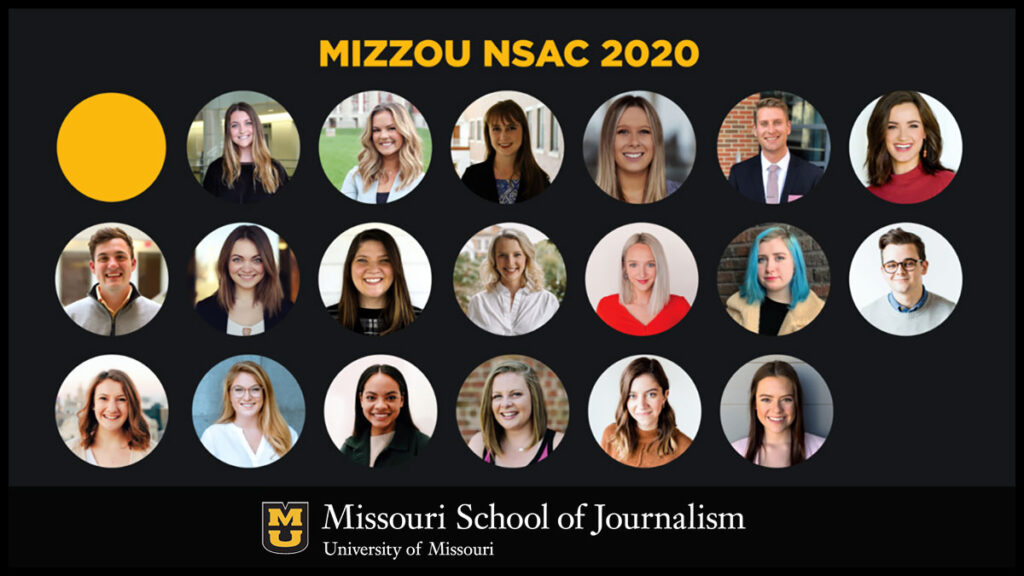 Columbia, Mo. (May 19, 2020) — The Missouri School of Journalism’s 19 member National Student Advertising Competition (NSAC) team didn’t let the challenges of COVID-19 stop them as they advanced through the competition to the national finals to compete against seven other teams across the nation.

The team was tasked with developing a business-to-business marketing campaign for Adobe’s Experience Cloud for Advertising ad tech software. The direct-to-business challenge was the first in NSAC’s 35+ year history, and it added a challenging element to this year’s competition, according to Associate Professor Holly Higginbotham, NSAC faculty advisor.

“Our strategic communication classes focus primarily on consumer-to-consumer advertising efforts, so this year’s team had to figure out how to translate the principles that could apply to the business market. Add in that they were promoting a pretty technical product, and the learning curve at the beginning was steep,” she said. “It was magical to watch them work through it all and ultimately create an incredible campaign.”

“While competition rules don’t allow me to share details about the team’s winning campaign, one judge noted in her feedback, ‘Who knew you could make something so technical seem so magical?'” said Professor Jon Stemmle, faculty chair of strategic communication and co-director of MOJO Ad. “That’s the ability of the J-School, to create storytellers no matter the discipline.”

During the national finals, the judges will review each school’s campaign plan book and pitch, then will hold a live Q&A session with individual teams virtually on May 20. The winner of this year’s competition will be announced June 8 in conjunction with the AAF national conference, which will also be held virtually.

NSAC, a program of the AAF, is the premier college advertising competition for AAF student chapters across the country. It provides more than 2,000 college students the real-world experience of creating a strategic advertising campaign for a corporate client.

“This competition is well known and respected among industry professionals, many of whom did the competition themselves when they were students,” said Higginbotham. “Schools that do well attract attention and it opens doors for job opportunities for our students because industry pros know how hands-on it is and the experience students gain by participating.” Before this year’s team advanced to the finals, they first went to their district competition where they placed first, for the third year in a row. They competed with schools from Missouri, Iowa, Kansas and Nebraska. By virtue of their district win, they advanced to the semi-finals and competed against 17 teams from 15 schools. The top eight scoring schools then moved to the finals.

In the past, clients have used submitted ideas from winning teams. In 2018, Ocean Spray used social media creative concepts from MU in a campaign. MU was third in the nation that year.

Creative Director Reed Wilson, of Columbia, was in charge of leading the creative team in conceiving big ideas and tactics, overseeing the development of tactics, the plan book and presentation. Her role also involved collaborating with strategists to ensure that the campaign was on strategy, as well as collaborating with the account executive to provide overall direction for the team.

Wilson said luckily they had finished the majority of the campaign, creative work and plan book when their work had to be moved remotely and online because of COVID-19.

But when it came to presenting to the client, they had to make the entire presentation online, which presented some challenges such as not being able to work together in person, said Wilson.

“I thought we were done then and there. But we kept our eye on the goal, stayed incredibly positive and continued to meet in order to finish the campaign,” said Wilson.

“We spent many, many hours on Zoom coordinating with our creative director, copywriters, presenters and our adviser Holly Higginbotham,” said Isabella Mangan, of Overland Park, Kansas.

Mangan served as the account executive for the team. The project taught her how to execute a project over a long-term period. While in school many projects are designed to be completed within weeks or months, this project spanned an entire school year. That meant that there were tiny details that needed to be taken care of immediately and some big picture items that evolved as the team progressed through the project.

“It helped me learn how to prioritize and manage a project across varying timelines,” Mangan said. “NSAC and this campaign, in particular, also taught me that teamwork truly does make the dream work. Without the creativity and intelligence of everybody on our team, our work would never have reached its full potential or been as beautifully-executed as it was.”

In addition to the challenges of COVID-19, there was the challenge of understanding the product they were promoting and learning how to create a B2B campaign, she said.

“We spent countless hours researching, using primary and secondary methods to better understand the language of our client and product,” Mangan said. “To overcome the learning curve, we took everything we had learned through the J-School and internships and built upon it to understand what we were up against.”

The team’s dedication to the project over the course of eight months was impressive, Higginbotham says, as was their focus once COVID-19 transitioned classes to remote learning. AAF extended the March deadline by a week to give teams more time to submit their plan books as they adjusted to the challenges of COVID-19. It was cushion the MU team didn’t need as they submitted their plan book by the original deadline.

“It was just a great example of how this team stayed focused through a really unsettling time as we all got used to our new normal,” said Higginbotham. “It’s just one of many things that point out this team’s resiliency.”

The NSAC team learned on June 5 that they finished third in the national finals, which were held virtually this year as part of the annual American Advertising Federation’s professional conference. The team also received the AdMall Research Award for demonstrating the best use of market research.

“This is the second time in three years that our Mizzou team has finished third nationally and won the Research Award, something we’re especially proud of given the emphasis our strategic communication program places on the research process in campaign development,” said Stemmle.

The University of Virginia took first place and Texas State University placed second. The competition began with a field of 102 colleges and universities, and Mizzou’s team advanced through the district and semi-final rounds to be one of eight national finalists.