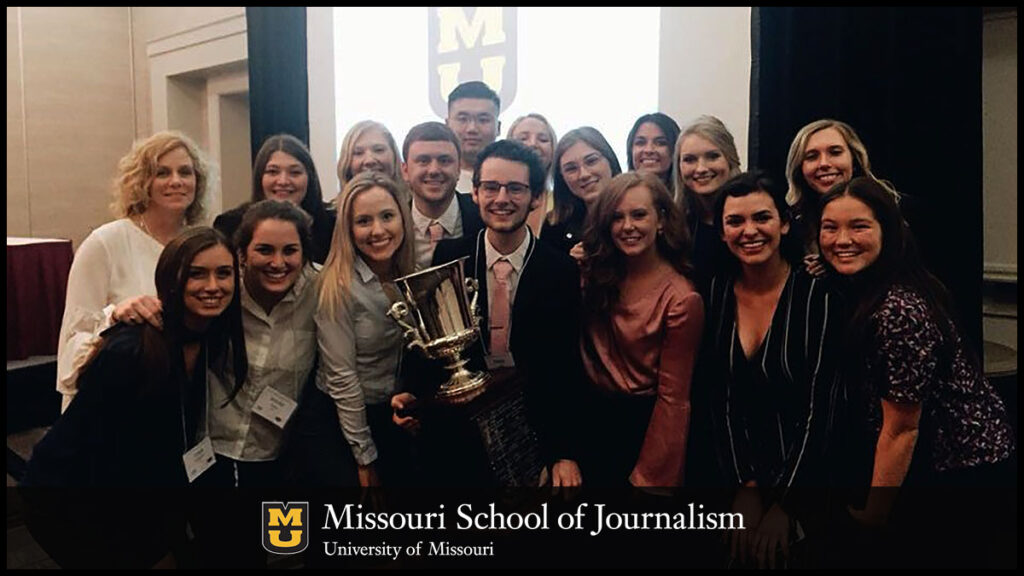 Columbia, Mo. (June 3, 2019) — The 2019 National Student Advertising Competition (NSAC) team at the Missouri School of Journalism recently completed this year’s competition, placing ninth in the nation. The team missed out on being one of the eight teams to make the national finals by a fraction of a point. This was the second straight year the Mizzou NSAC team won its district and finished in the top 10 nationally, having placed third in the nation last year.

Associate Professor Holly Higginbotham, who serves as faculty adviser for the group, was especially proud of this year’s showing. “This year’s group did so many things well, but what impressed me the most was their attention to detail throughout the process,” she said. “They stayed on task and were laser-focused from day one.”

NSAC is a student program run by the American Advertising Federation (AAF), which is the nation’s oldest national advertising trade association. Students from colleges across the country  compete against one another to develop an integrated advertising campaign for a real-world client. This year’s client was Wienerschnitzel, a quick service restaurant specializing in hot dogs with locations largely in the Southwestern United States. It challenged this year’s NSAC students to enhance consumer perception of the hot dog by addressing common misconceptions people have about them.

Early in the fall semester, Higginbotham selected the 20-person team. The students were incoming seniors studying strategic communication within the School of Journalism and were chosen based on their ability to fulfill a specific role on the team. These roles included account planner, researcher, brand strategist, copywriter, graphic designer, digital strategist, media planner and video producer, among others.

The team had two main leaders: the account executive, who was in charge of the overall research behind the strategy for the project, and the creative director, who was in charge of implementing that strategy in the most effective, yet still creative, way. The account executive for this year’s team was Katie Laughlin and the creative director was Rachel Kim.

In the fall, Laughlin’s side of the team – consisting of researchers, account planners and a brand strategist – worked diligently to conduct both primary and secondary research on Wienerschnitzel and its target audience. The research team then applied their findings to come up with an understanding of who the consumer is and what might motivate them in terms of their purchase decisions. Then, the group formed a strategy for how to execute their research in a creative, compelling manner.

At the start of second semester, Kim, along with the entire creative side of the team, got to work on a creative approach to convey the strategy that Laughlin’s group devised in the fall. From January through March, the team put together a plan book, which outlined their research, insights, strategy, creative concept and all of their tactics. Among those tactics were video executions, social media strategies and an experiential pop up shop. The group submitted the plan book, the contents of which comprised half of the team’s final score, to judges before departing for spring break.

Upon return from break, the group had 10 days to work on a 20-minute oral pitch for the campaign, which was presented in front of judges at the AAF District 9 competition held in Kansas City, Mo., April 12. The in-person pitch accounted for the other half of the group’s final score.

The MU NSAC team won their district, which consisted of schools from Missouri, Iowa, Kansas and Nebraska. The District 9 win qualified them for the semi-final round, where 18 other district winners competed for one of eight spots in the national finals. The team narrowly missed the finals, finishing ninth in overall scoring.

Laughlin was disappointed with the outcome, but didn’t let that hinder her outlook on the experience. “Coming up just short of nationals definitely stung, but I had such an awesome time working on this capstone with so many great people,” she said. “I had great fun and at the same time learned so much that I don’t care as much about final placement as I do about the memories and learning experience I gained in the process.”