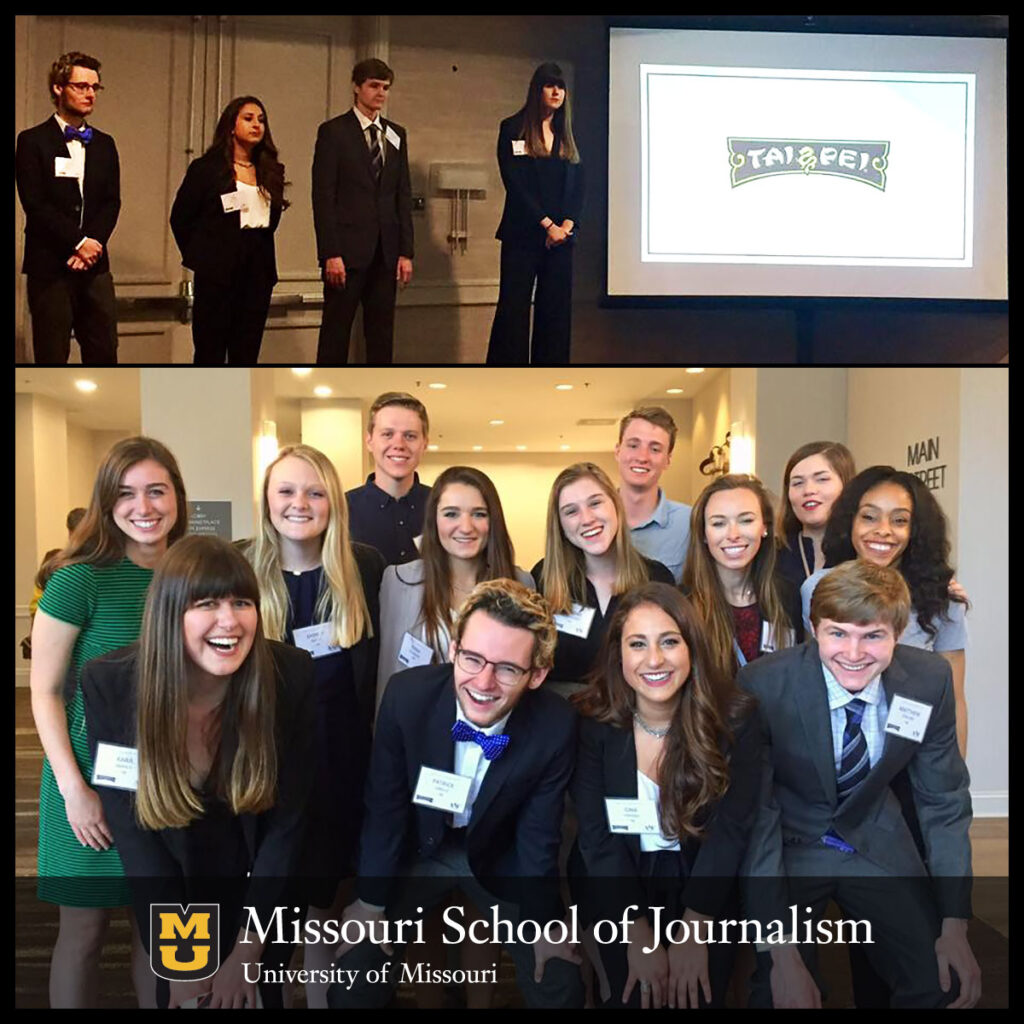 At top, members of the NSAC Mizzou presentation team await questions from NSAC District 9 judges following their campaign pitch; from left, Patrick LaBelle, Gina Pintozzi, Matthew Carlino and Kara Maricic. At bottom, students are all smiles after delivering their pitch.

Columbia, Mo. (May 8, 2017) — The student-led team from the Missouri School of Journalism earned multiple awards at the District 9 National Student Advertising Competition held in Kansas City on April 14. Mizzou’s NSAC team won third place in this year’s competition, the third time in four years the team has placed third. Two members of the team, junior Patrick LaBelle and senior Gina Pintozzi, also were recognized as the most outstanding presenters in District 9.

The National Student Advertising Competition is a program of the American Advertising Federation, in which college AAF chapters across the nation are challenged to create a promotional campaign for a national brand. This year’s client was Tai Pei Frozen Asian Entrees. Students were challenged to craft a campaign to rebrand Tai Pei and target young millennial consumers.

While other schools in District 9 incorporate the competition as part of a capstone class or other course, the NSAC effort at Mizzou is an extracurricular activity so that students of all levels can be involved. This year’s team was made of students – freshmen to seniors – who spent from September to April researching and developing a campaign strategy, executing tactical ideas then presenting their campaign in a written plan book and oral pitch to judges during the District 9 competition.

According to Holly Higginbotham, NSAC faculty adviser and assistant professor of strategic communication, the competition offers students a tremendous opportunity to deepen their understanding of what it takes to develop an integrated promotional campaign. “It’s really inspiring to see how they come together, led by the seniors, to put into practice the things they are learning in the classroom,” she said. “I couldn’t have been prouder to see them pitch their final campaign on that competition stage and to read all the favorable comments the judges provided about their research, strategy and tactic ideas.”