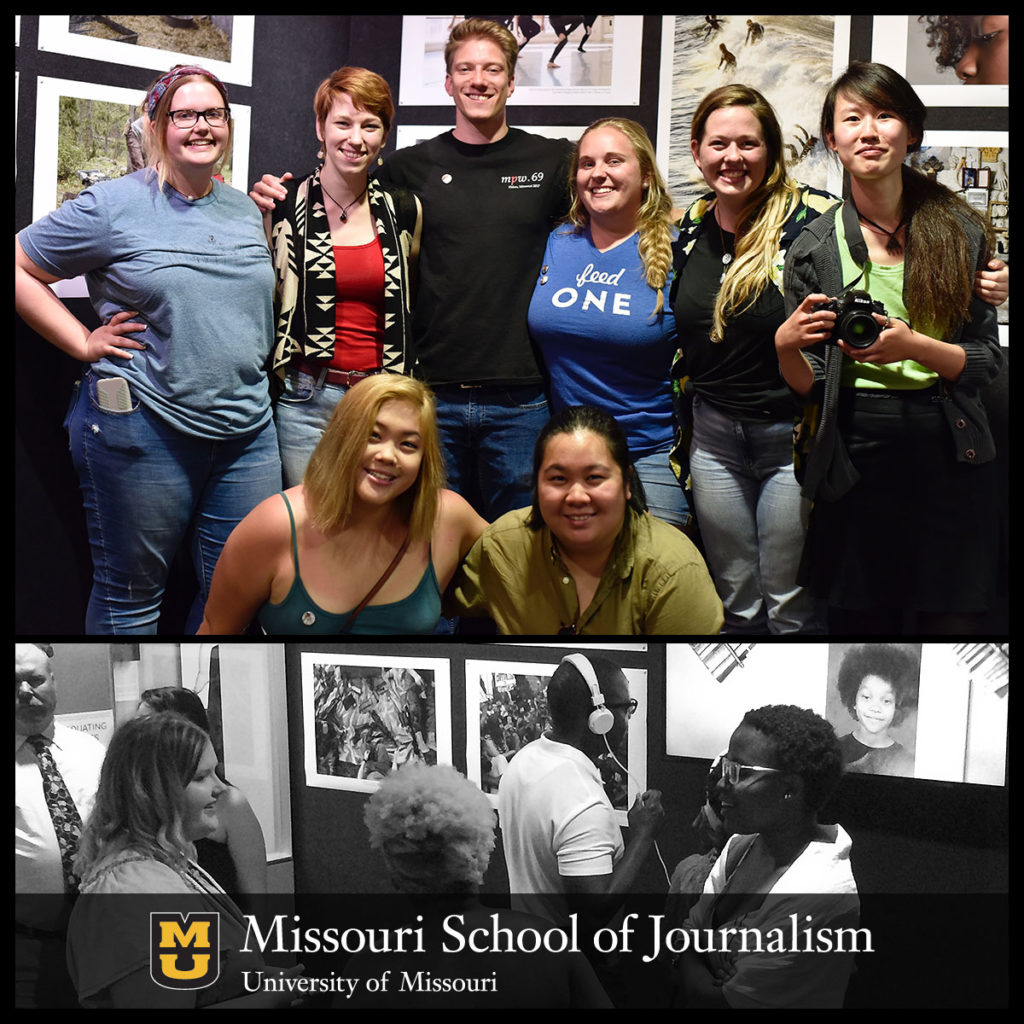 Graduating photojournalism students were responsible for the entire “Parting Shots 7” exhibit, an annual gallery show which recognizes some of the best work by Missouri students. Planning and mounting the exhibit included editing, toning and printing the selected images.

Columbia, Mo. (May 16, 2018) — Graduating photojournalism students at the Missouri School of Journalism got one last hurrah before commencement on May 13: their own photography exhibit.

“Parting Shots 7” is an annual gallery show that recognizes “some of the outstanding work by our graduating photojournalism majors, both undergraduate and graduate,” said David Rees, photojournalism faculty chair.

“This end-of-the-year exhibit was initiated in order to give students some hands-on gallery exhibit creation experience,” he said. The show opened to parents, family and friends during a graduation day reception in McDougall Center Gallery in Lee Hills Hall. “Parting Shots 7” will be on display through Sept. 17.

“My impression is that students love ‘owning’ the gallery for this show,” Rees said. “It’s a different kind of experience to see your pictures on a wall rather than in some other kind of publication.”

Senior Liv Paggiarino’s eyes filled with tears when she first saw her 20-by-24-inch photo on the wall during installation.

“I definitely cried a little,” she said, “partially because it was so overwhelming to see my own work on the same walls that housed the work of some really gifted and accomplished photographers, and partially because it finally really hit me that things are going to change from what I knew the past four years.”

“I’m going to grad school, so I’m staying around,” she continued. “But a lot of my dear friends are going out into the world and finding opportunity elsewhere. It made me sad, but it also made me realize I want to appreciate the time I have left with them.”

“(We) asked the graduates to submit five of their best photos…for the show,” Houser said. “It was important to our committee that we select a photo that depicted each photographer’s style and what was important to them.”

The graduate students were responsible for the entire exhibit, Rees said, which included editing, toning and printing the photos, then designing and mounting the exhibit.

“Every year that I’ve been here, Parting Shots has been built up as this really cool senior send-off thing that only the photojournalism (sequence) does,” Paggiarino said. “Last year in particular, when I knew all of the photographers whose work was shown up on the walls, I was very proud of my classmates and all the effort that went into going to school here.”

Now Paggiarino’s photo is on display, along with photos and multimedia stories from 19 fellow classmates.

“It’s hard not to compare yourself to the people around you, especially when you’re surrounded by incredibly talented individuals and friends,” Paggiarino said. “But with Parting Shots, it’s a chance for everyone to just look at their work, touch the physical print and know that they made something worthwhile during their time at Mizzou.”

This was the final Parting Shots exhibit for Rees, who’s retiring after a 31-year career at the journalism school. Mizzou alumni from as far away as Seattle, London and Germany surprised Rees on May 8 while he was teaching his last class, and his former students attended a reception in his honor the next day in the Edom Photojournalism Lab.

“David Rees was the reason I chose Mizzou,” Houser said. “He has been a leader in the preparation of countless journalists now working across the world. His ability to draw the best from students in a kind and humble way inspires and encourages students to work harder and love photojournalism. He will be greatly missed in the department, yet his legacy will live on in the work of his former students.”