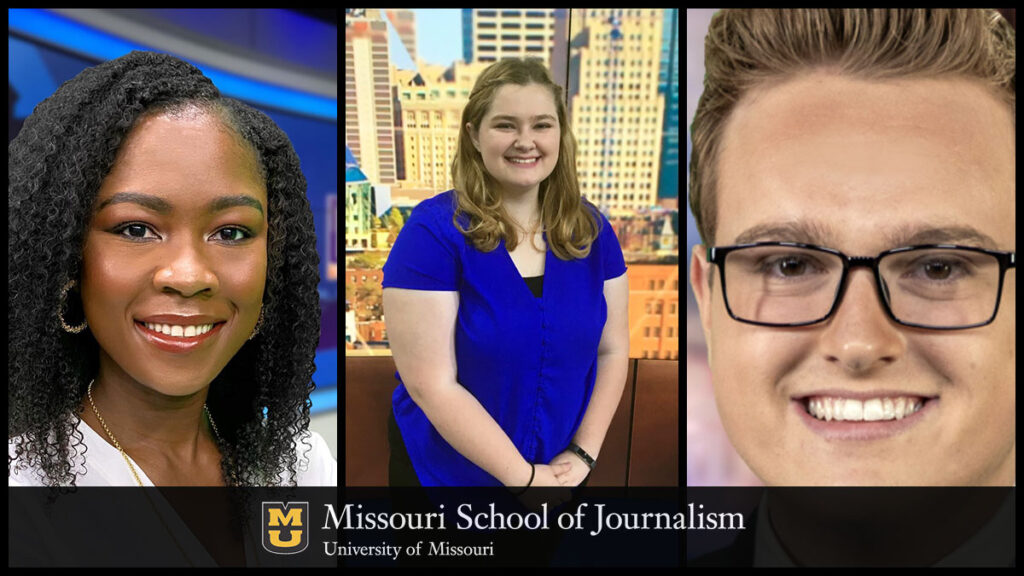 Despite a global COVID-19 pandemic and the accompanying economic crisis, more than two dozen recent graduates from the Missouri School of Journalism have landed broadcasting jobs at TV stations across the country.

Columbia, Mo. (July 31, 2020) — Teams of recruiters from 10 major TV companies actively recruited more than two dozen Missouri School of Journalism students who graduated in May 2020, in the midst of hiring freezes, layoffs, COVID-19 and unemployment rates rivaling the Great Depression.

The new graduates are receiving competitive entry level salary offers, said Kent Collins, professor emeritus and a current consultant at the Journalism School. Just a few years ago reporter salaries typically started in the mid-20s, said Collins. Now reporters have been seeing offers of at least $30,000, with most offers in the mid-to-upper $30s. Newscast producers now are often making between $38K and $52K, he said.

Each year the School provides KOMU journalists the opportunity to interview one-on-one with major TV group owners. Recruiters come to campus for two days. This year the School did several Zoom calls with employers after ‘no travel’ orders came out as a result of COVID-19.

“TV news executives are happy to be invited to campus to interview students and meet with faculty,” said Collins. “In these visits the TV industry folks come to understand how the Missouri Method – in this case KOMU-TV – teaches both skills and principles of good journalism. Our ‘entry-level’ students, those who are just graduating, are really second-level employees.”

About the Missouri Method

During their academic careers, Missouri students receive hands-on training as reporters, anchors and producers by working for KOMU-TV, the commercial NBC affiliate owned by MU that reaches 40,000 homes across 15 counties in mid-Missouri. During their time at KOMU, the young journalists learn how to cover the news using state-of-the-art equipment, a new all-digital control room and multiple live-remote mobile units.

They are assigned new stories on varying beats, just like they would at any other professional working newsroom after college. In the past, students have covered stories including presidential visits to the state, devastating tornado damage on the second day of summer school, national sporting events like the Super Bowl in large, unfamiliar cities and the COVID-19 pandemic. Missouri journalists walk away with countless awards each year from organizations including Hearst, Missouri Broadcasters Association and Kansas City Press Club, a chapter of the Society of Professional Journalists.

“Assessors repeatedly noted in discussions with faculty members that Missouri Radio and Television students fully understand the standards and ‘best practices’ of the profession, even if they are still in the process of learning to execute those standards and practices,” Collins wrote in an executive summary. “Assessors noted that Missouri students are prime recruits because they fully understand the rigors of a professional level newsroom.”

KOMU-TV is just one of the professional, award-winning newsrooms housed at the School of Journalism. Others include the Columbia Missourian, Vox Magazine, Global Journalist, Missouri Business Alert and KBIA-FM.

Rosemond Crown, MA ’20, graduated with a degree in journalism with an emphasis in TV broadcasting. She landed a multimedia journalist position at KWTX in Waco, Texas, which she started at the end of June. She was thankful to secure a job in Texas where she would be close to her family and fiancé.

“(What made Rosemond stand out was) her ability to hit the ground running and her professional experience at KOMU,” said Bob Walters, news director at KWTX. “Also, she networked with my staff extensively during the interview process, reaching out to them and following them on their social pages.”

As Crown looked at job opportunities, she noticed there were fewer options as some companies had hiring freezes. She also experienced some delays at companies’ corporate levels as she moved through application and interview stages. These unique challenges added the pressure to present herself as the best candidate for those companies that were hiring, she said. But the Missouri School of Journalism prepared her well for the job, she said, as well as the interviewing process – particularly her two years of service at KOMU where she served as a production assistant, anchor, reporter and producer.

“We were presented with interview tips and strategies,” she said. “But I think more so my working as a reporter helped me in the search and interview process. I just tried to treat the job hunt as a story I’m investigating. I then treated the interview process as an interview with a story subject – I answered their questions, but more importantly I asked questions.”

Crown was among about 50 applicants who applied for the job at the CBS station, said Walters. He saw a higher number of applicants than he’s seen in quite a while. Walters said the station has been lucky in that they haven’t had to lay off anyone or require anyone to take furlough leave. He said although the station isn’t expanding, they are continuing to fill the openings that they have.

Collins said although advertising at news outlets is lower, news ratings at TV stations are setting records as people have been interested in consuming COVID-19 news.

“We are doing well, and we are honored that people are turning to us and trusting us as their source for news on-air and online,” said Walters. “We have dominated social from the start by being aggressive and intentional with our digital content.”

Melody Cox, BJ ’20, landed a job as a TV news producer at KMBC-TV in Kansas City, Missouri. She started her new position at the beginning of June. She interned for the company during the summer of 2019 and stayed in touch with mentors and managers she met.

Cox said she began talking to recruiters as a junior, which helped her begin developing relationships with them. She attended the Excellence in Journalism conference as a student, which helped her with skills to communicate better with recruiters and news directors, she said. Associate Professor Jeimmie Nevalga, who taught her producing class, also equipped her well for talking to recruiters and figuring out what questions to ask.

She said she was thankful for all the hands-on experience she gained while working at KOMU-TV as a producer.

“I know the flow of writing stories, making sure we have enough in the show, cuing live shots – telling reporters when to start reporting,” she said. “I know how to respond to breaking news and to prepare for the unexpected because of KOMU.”

Austin Walker, BJ ’20, landed a job in Tucson, Arizona, at KVOA-TV as a reporter and fill-in anchor. Like many he applied for jobs, only to see them disappear when COVID-19 forced newsrooms to go into hiring freezes.

Walker said he’s thankful for the skills he learned from KOMU-TV and the Journalism School, which helped him land a job.

He first learned how to talk off the cuff during severe breaking news while covering tornado devastation in Jefferson City, Missouri, at KOMU.

His training also taught him how to take more risks as a journalist, he said.

“KOMU’s Emily Spain’s ”performance class really helped me and broke me out of the timid shell that a lot of us are stuck in when you first start,” he said.

He said without all the experience and all that he had learned at the Journalism School and KOMU, he wouldn’t have felt as ready to help cover wildfires in Arizona, at his new job after only one day of training.