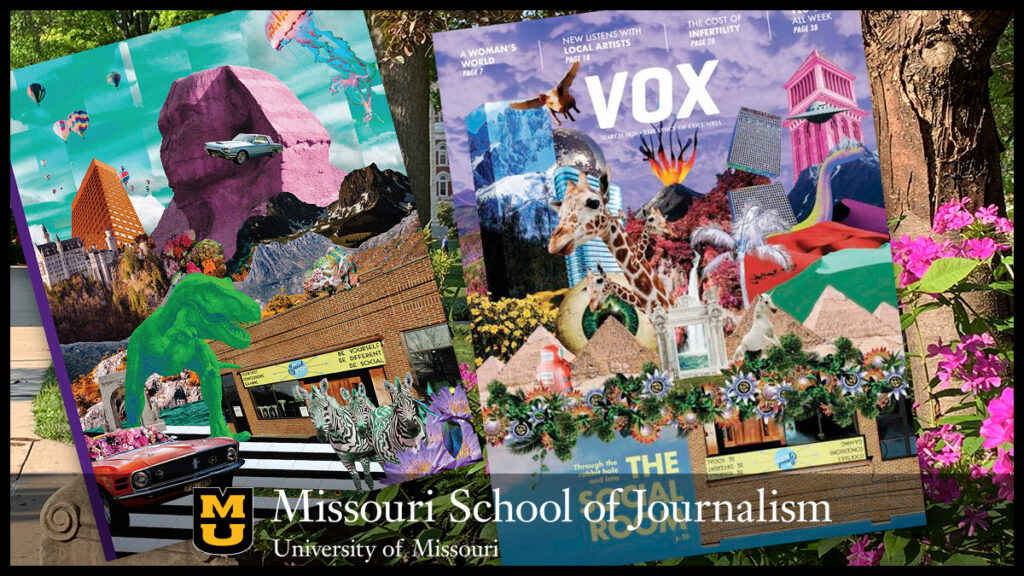 Columbia, Mo. (July 19, 2021) — Sam Balmer, BJ ’20, won top honors in the Photo Illustration category of the 2020 Mark of Excellence Awards, presented by the Society of Professional Journalists. The award honors the best in student journalism.

Balmer won for “Wonderland,” which was used in Vox Magazine’s March 2020 issue to illustrate the story “Columbia nightclub The Social Room doubles as an LGBTQ safe space.” He is now a graphic designer at the World Chess Hall of Fame in St. Louis.

“It’s a delight to work with gifted student designers like Sam, who created these colorful and slightly trippy photo collages to illustrate a story about the inclusive scene at The Social Room,” said Associate Professor Heather Lamb, editorial director of Vox Magazine. “He was invested in the visuals from concept to production, and even shot some of the photography himself.”

“It’s a privilege to work with such talented students,” said Associate Professor Sara Shipley Hiles, Vox Magazine’s digital director. “They’re not only creative and committed to excellent journalism, they are thoughtful and empathetic as well.”

Mark of Excellence Awards entries are judged by professionals with at least three years of journalism experience. Judges were directed to choose entries they felt were among the best in student journalism. If no entry rose to the level of excellence, no award was given.

“Each of these awards represents the collaboration of talented students who come together to tell stories that are important to the Columbia community,” said Lamb. “During an extremely challenging year, they continued to bring creativity and commitment to Vox every day.”

Vox Magazine is an award-winning, cross-platform city publication where Missouri School of Journalism students — supervised by professionals — are the writers, editors, designers, photographers and managers. It keeps readers informed about what is happening and where to be in Columbia, Missouri. Vox publishes a monthly print edition and a website, providing insight on local news and culture. The print edition has a circulation of 10,000 and is distributed in the Columbia Missourian on the last Thursday of the month. It can also be picked up at drop locations around Columbia.