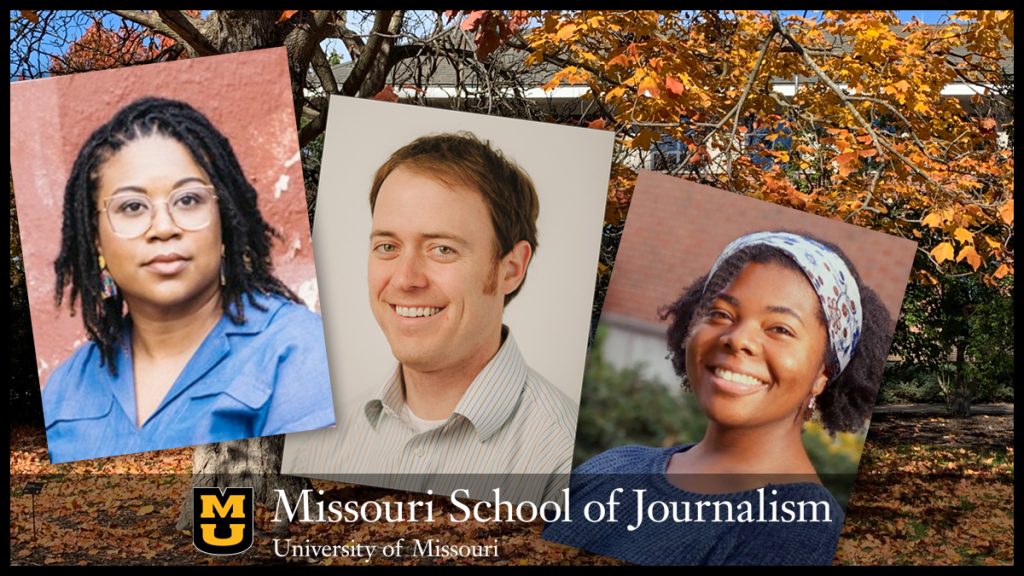 COLUMBIA, Mo. (Nov. 18, 2022) — As KBIA-FM continues its yearlong 50th anniversary celebration, the Missouri School of Journalism hosted KBIA alum Juana Summers, BJ ’09, the newest co-host of All Things Considered on NPR, as she spoke Thursday with students and faculty about her journey from student reporting to one of the industry’s highest-profile radio roles.

In addition to taking questions from the audience, Summers spoke with KBIA News Director Ryan Famuliner, BJ ’07, and producer Katelynn McIlwain, BJ ’22, for the NPR member station’s latest anniversary event. Her remarks offered inspiration and practical wisdom to students while highlighting the importance of using journalism to build relationships with people in their communities.

“For most people I’m talking to, I’m almost certainly the first journalist they’ve ever been interviewed by in their life, and there’s a good chance I’m the only journalist they’re ever going to talk to,” she said. “That’s a privilege for me, but it’s also a lot of responsibility to earn that public trust. …I try to make sure people understand where their name and sentiments are going to show up, because no one likes to be surprised by that kind of thing.”

Beyond alluding to the proliferation of fake news and distrust of mainstream media, she framed the role of a journalist as a connector across lines of community, age and race.

“I did not grow up listening to NPR, and there weren’t voices that sounded like me on the radio. There were not people who looked like me telling the stories. I hope that in having someone like me in this role, in my early 30s and a woman of color, I hope someone hears my voice and finds a familiarity.”

“I did not grow up listening to NPR, and there weren’t voices that sounded like me on the radio,” said Summers, a Black woman. “There were not people who looked like me telling the stories. I hope that in having someone like me in this role, in my early 30’s and a woman of color, I hope someone hears my voice and finds a familiarity.”

Summers’ visit was part of a slate of events and programming KBIA has planned leading up to the station’s official 50th anniversary in May 2023. (The station first went on the air in 1972, one year after NPR’s first broadcast and the launch of All Things Considered.)

Most prominently, KBIA launched The 50 Project, a series of interviews with KBIA alums from all over the country — including Summers — who recount their experiences in journalism and memories of their time at KBIA.

Acclaimed author and humorist David Sedaris will come to the Missouri Theatre on April 17. Best-known today for his comedic essay collections, Sedaris got his start at NPR’s The Wild Room after host Ira Glass discovered him performing in Chicago.

Ragtag Cinema, Columbia’s independent movie theater, will also screen a yet-to-be-determined film in KBIA’s honor, leading up to a final celebration marking the true anniversary in May 2023.

Aside from training a current host of NPR’s flagship show, the station has distinguished itself in a number of ways.

“Of radio stations in the Columbia market, we are the only one that produces podcast content, and most of that originates from students at the J-School,” said Mike Dunn, KBIA general manager who has seen the station expand over his 36 years at the station. “We are probably the largest small-market newsroom in the country with six full-time staff — most small-market stations are lucky to have one. Our growth here has been really good.”

KBIA has introduced a number of innovations in recent years, from investing in more podcast offerings to joining the One Newsroom, a space for collaborative, multiplatform news production across the School of Journalism’s professional news organizations.

Another landmark event occurred in 2015, when Dunn accomplished a long-sought goal: making KBIA an all-news station by placing its classical music offerings on a separate station purchased from Stephens College.

“We initially thought we might lose some of our audience, but lo and behold, our ratings actually went up,” Dunn said. “When you’re producing more good news content, people gravitate toward it.”

The all-news format further highlights KBIA’s local news content, which distinguishes the station from others around the country. Janet Saidi, KBIA’s long-form audio producer and an assistant professor at the School, said that while local news might set KBIA apart, the founding principles of NPR not only make this kind of news a natural fit, but make it a meaningful — and daily — celebration of the station’s 50th anniversary.

“Since NPR has become so successful in what it does, a lot of people don’t realize it’s not just a big headquarters in Washington that owns journalism,” Saidi said. “This thing called NPR started 51 years ago with the idea that communities would run and pay for independent journalism. It’s a very community-based, grassroots ideal, and that’s what we’re celebrating; how impactful that ideal has become in 50 years.”