Columbia, Mo. (April 27, 2016) — KBIA-FM was honored in two out of the five radio categories in the Sigma Delta Chi contest sponsored by the Society of Professional Journalists. 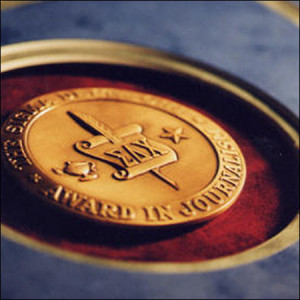 Missouri School of Journalism students produce stories with audio, video and text for the KBIA’s website while also producing traditional radio newscasts. The station is owned by the University of Missouri and serves a 70-mile listening area, which includes more than 40,000 listeners in 14 counties and Kirksville.

KBIA won the “Breaking News Reporting” category for its coverage of the events on the University of Missouri campus in November 2015. The entry included snippets of the coverage from the 24-hour period starting the morning of Nov. 9. The entry included stories and coverage from KBIA professional staff members Becky Smith, Kris Husted, Bram Sable-Smith, Sara Shahriari and Ryan Famuliner.

Shahriari oversaw a team of reporters that put together a half hour broadcast that aired the same day as the resignations of former University of Missouri System President Tim Wolfe and former MU Chancellor R. Bowen Loftin. A number of Missouri School of Journalism students contributed to that broadcast, including Caty Eisterhold, Ailin Li, Ross Terrell, Michaela Tucker, Andy Humphrey, Kara Tabor and Hellen Tian. Student Nick Yahl also anchored some of the newscasts in the entry.

In their comments, the judges said:

“Very impressive coverage of events of national and international significance. The team went live when it counted. They went to the center of the controversy and got great first-hand sound from a wide variety of people with different viewpoints. They covered the breaking events from a wide variety of angles. Excellent writing and comprehensive coverage. The production values were high. This package displays superior planning, assignment editing, reporting, writing, and coordination. Brava! Bravo!”

The other winning entry was in the “Public Service in Radio Journalism” category. This award went to the project “Shortage in Rich Land.” KBIA reporters Husted and Sable-Smith spent two weeks in the Missouri Bootheel in January 2015 covering a variety of stories related to agriculture and health.

Despite having some of the most expensive farm land in the region, the six-county area in southeast Missouri has a severely depressed rural economy. The residents experience some of the worst health outcomes in the state: an infant mortality rate matching that of the Gaza Strip, for example. These stories dove into some of these complex issues, which rarely get covered because of the region’s location on the map – far away from major media markets. KBIA shared their series with other public radio stations in the state, and many of them aired the whole series, including the stations in Cape Girardeau and Jonesboro, Arkansas. The series also won a 2016 regional Edward R. Murrow Award.

After the series aired, KBIA staffers followed up in May with an event in Kennett titled “Health Barriers: Symptoms of a Rural Economy.” In Kennett, The station hosted a BBQ dinner at the First Presbyterian Church and invited those in the community to join the conversation. The show was recorded and aired two weeks later at stations across the state.

The panel and the audience brainstormed about solutions to bringing more jobs back to the area, how to provide better health care to the rural poor, and who should be working together to achieve the goal of a revived, successful economy. Community members were sitting at the same table with their local politicians and state legislators, health network directors and economic development coordinators.

Among the many who contributed to this effort was Travis McMillen, a video producer for the Reynolds Journalism Institute. Student Lowell Thomas and former staff member Austin Federa also helped with the production of the show.

The judges’ comments on the story were:

“The story was presented in a way that clearly frames the problem for the audience. The use of natural sound was ‘awesome.’ It’s a compelling story, covered many aspects of the problem and saw results. A true ‘home run.'”

These are the second and third Sigma Delta Chi awards for KBIA news. KBIA won its first in 2014 for its documentary, “Heartland, Missouri.”