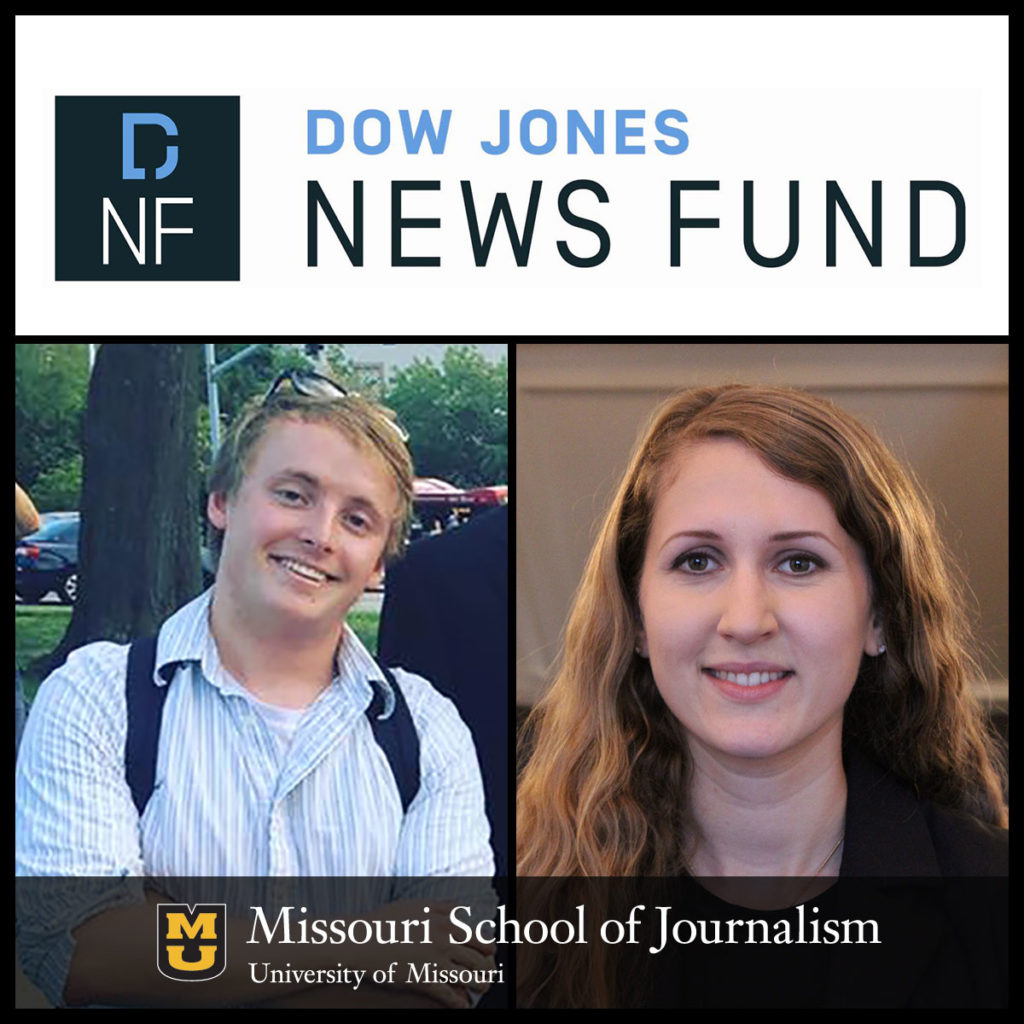 Master’s students Alexander Derosier and Iuliia Alieva, selected for Dow Jones News Fund summer internships, are among 18 students who will work as data journalists in newsrooms across the country.

Columbia, Mo. (March. 9, 2017) — Two Missouri School of Journalism master’s students have been selected for Dow Jones News Fund summer internships. They are among 18 students who will work as data journalists in newsrooms across the country, up from eight data interns in 2016, to meet the growing need for this skill set.

Iuliia Alieva, who is focusing her graduate studies in data reporting, will work at The Center for Public Integrity in Washington, D.C. She came to the United States as a Fulbright scholar from the Northern Caucasus region of Russia. Alieva earned her bachelor’s degree at the Pyatigorsk State Linguistic University in Russia with a major in journalism and minor in foreign languages. In summer 2016, she interned at the United Nations Headquarters in New York and worked with the Academic Impact division at the Department of Public Information.

Alexander Derosier will join KPCC public radio in Los Angeles. His entry into journalism was as an intern at KUWS, based at the University of Wisconsin-Superior, where he earned his bachelor’s degree in political science, journalism minor. Derosier has worked at various jobs in broadcasting in the Midwest and is currently covering state government in Jefferson City for Missourinet radio.

“The demand for data journalists is growing,” said Professor David Herzog, a member of the Print and Digital News faculty and the academic adviser to the National Institute for Computer-Assisted Reporting. “News organizations are looking to hire journalists who are at ease working with data.”

Investigative Reporters and Editors, headquartered at the Missouri School of Journalism, will be the training site for the interns. The student data interns will receive training in Excel, along with some deeper dives into SQL database analysis, mapping, data visualization and python coding. The students will receive their pre-internship residence training at the School May 30 to June 4. This is the second year in a row that Missouri has served as the training site for data journalism.

Herzog will oversee the data journalism training program. NICAR is a joint program of the School and IRE. Other instructors will be Denise Malan, an IRE training director, and Charles Minshew, MA ’13, IRE’s data services director. Minshew was a part of the Denver Post News staff that won the 2013 Pulitzer Prize in the Breaking News Reporting category for coverage of the Aurora, Colorado, movie theatre massacre on July 20, 2012.

The School launched the first data journalism initiative in the world in 1986, when it founded the Missouri Institute for Computer-Assisted Reporting, which later became NICAR. Since then, faculty members associated with NICAR have taught thousands of students and journalism professionals how to integrate data into their reporting, visualizations and news applications.

The DJNF program is part of a larger effort to prepare students for careers in journalism. DJNF has earmarked $405,600 in grants and operating expenses for the 2017 programs that include journalism internships for college students combined with pre-internship residential training. Funding for the data journalism. Funding is also provided for professional development for alumni, multimedia training for professors at Historically Black Colleges and Universities and Hispanic-serving institutions, and summer journalism workshops for high school students.

About Dow Jones News Fund
The Dow Jones News Fund is a 501(c)(3) nonprofit organization that promotes careers in journalism in the digital age. Our vision is robust news media staffed by well-trained, innovative journalists who reflect America’s diversity and are dedicated to a free, strong and fair press. The News Fund is supported by Dow Jones, Dow Jones Foundation, other media companies and private donations.