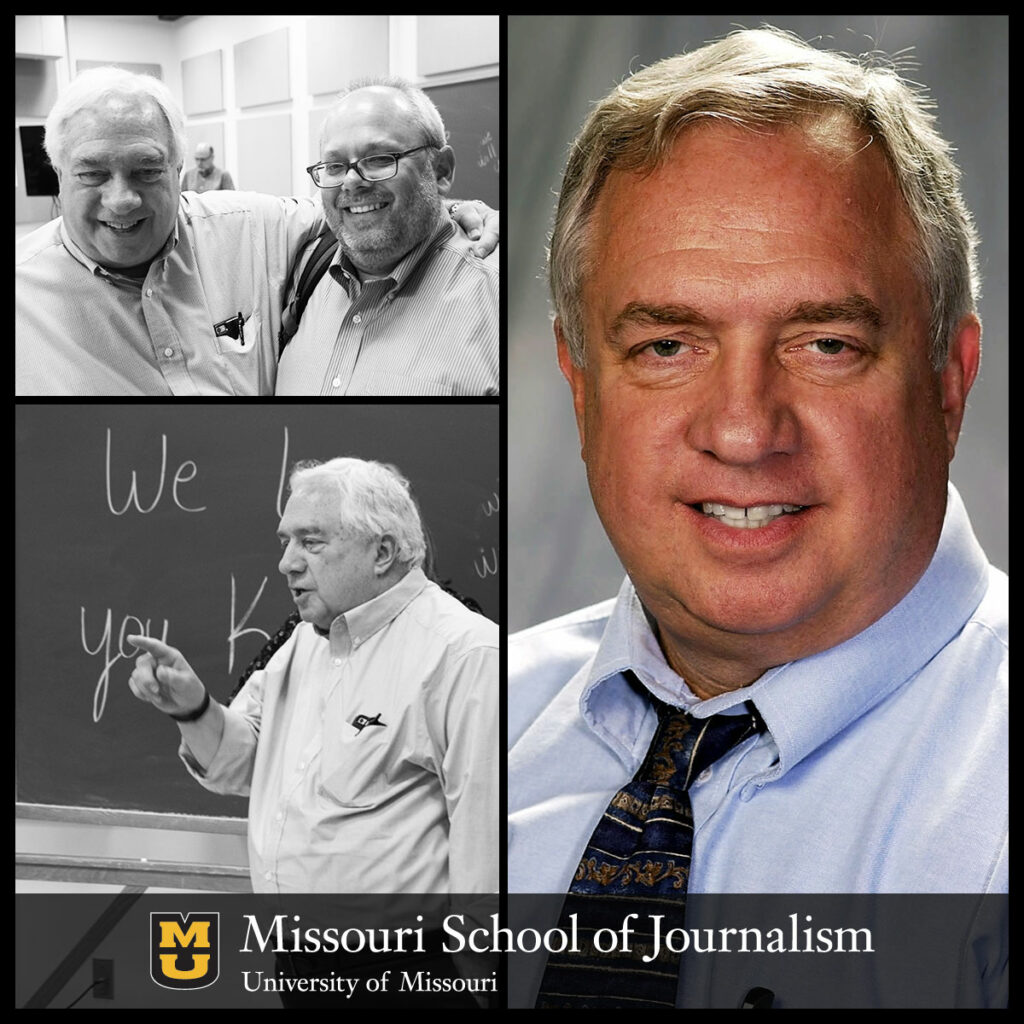 In recognition of his 50-plus year career as reporter, producer, anchor, newsroom manager, professor and consultant, the Association for Education in Journalism and Mass Communication has named Professor Emeritus Kent Collins as the 2019 recipient of the Edward L. Bliss Award for distinguished service to broadcast journalism education.

Columbia, Mo. (April 18, 2019) — Professor Emeritus Kent Collins is the 2019 recipient of the Edward L. Bliss Award for distinguished service to broadcast journalism education by the Association for Education in Journalism and Mass Communication (AEJMC). The award will be presented to Collins in August during the organization’s international convention in Toronto.

The Bliss Award is presented annually by AEJMC’s Electronic News Division and recognizes an electronic journalism educator who has made significant and lasting contributions to the field. The award is named for Edward L. Bliss, a long-time writer, producer and editor for CBS News. Bliss was known for his work with Edward R. Murrow and Walter Cronkite and ended his career as an educator at American University.

Collins is the 46th winner of the Bliss Award and the fourth Missouri School of Journalism faculty member to have received it. The others are Elmer Lower, 1999; Vernon Stone, 1998; and Rod Gelatt, 1987.

“Over his three and a half decades on the faculty, Kent Collins has impacted the lives of more Missouri broadcast students than any other faculty member in the School’s history,” said Stacey Woelfel, former news director of KOMU-TV who now serves as the School’s director of the Jonathan B. Murray Center for Documentary Journalism. “Literally millions of Americans receive the top-quality news they deserve from their local broadcasters because of Kent’s dedication to doing his job so well.”

Colleagues and former students submitted numerous letters attesting to Collins’s long-standing reputation as an innovator in broadcast television news. They also noted how he helped them achieve the highest levels of excellence. Among the many accolades are:

During his 50-plus year career Collins has served duty as reporter, producer, anchor, newsroom manager and consultant. A 1970 journalism graduate of the University of Missouri, Collins’s first television newsroom was KOMU-TV, the only university-owned network affiliate (NBC) in the country that uses its newsroom as a working lab for students. He has twice served as news director of KOMU-TV since joining the faculty in 1984. Collins has worked in or studied in more than 80 television newsrooms from Beijing to Los Angeles to Sofia, Bulgaria, to Nairobi, Kenya.

Today, Collins continues to coach television journalists and consults television station owners in the U.S. and overseas. He serves as an expert witness in civil suits involving the media. Collins has served as a co-researcher and editor of an innovative project with the MU School of Law, which investigated the effectiveness of judges, prosecutors and police responding to domestic violence. And he manages what he calls the Journalism School’s aggressive “recruiting season” that places students in their first jobs in some of America’s finest television and digital newsrooms.

In congratulating Collins, Dean David Kurpius thanked him for his tireless energy and his dedication to sharing the highest standards of journalism with his students, colleagues and the industry at large.

“The Bliss Award reflects Kent’s legacy, that of significant and lasting contributions to the field,” Kurpius said. “His leadership will continue to benefit television journalists for years to come.”

AEJMC is a nonprofit, educational association of journalism and mass communication faculty, administrators, students and media professionals. Dedicated to promoting the highest standards for education, the Association provides an abundance of resources for news, research and career opportunities, including a multicultural network of practitioners from every discipline of journalism and mass communication.