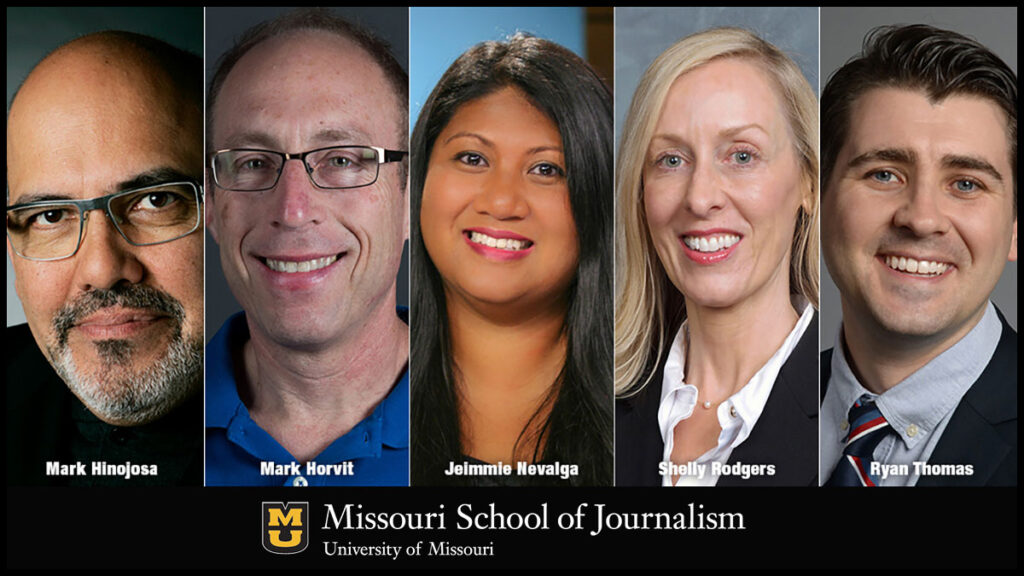 Annual endowment will be used for salary supplement and support for teaching and research.

Columbia, Mo. (Feb. 19, 2020) — Five University of Missouri journalism faculty have been selected to receive a Reynolds Faculty Fellowship award. These unique fellowships provide support for scholarship and research, in addition to salary enhancements, in recognition of high-quality work.

“I am grateful for the generous support of our alumni, friends and the Donald W. Reynolds Foundation to be able to provide these fellowships to our faculty,” said David Kurpius, dean of the Journalism School. “Teaching excellence is a hallmark of the Missouri School of Journalism and these fellowships are an investment in our faculty and will ensure the School remains competitive in attracting and retaining elite journalism faculty.”

The five fellowships are part of a larger program established in 2014 by the Donald W. Reynolds Foundation to help recruit and retain talented faculty at the Missouri School of Journalism, the alma mater of the foundation’s namesake. The School will receive $10 million from the Foundation in 2021; however, the Foundation is allowing up to 50 third-party donors to create the individual fellowships immediately with gifts of $200,000. Those matching donors receive the right to name the fellowships. Once the Foundation’s gift is received in 2021, the level of each endowed fellowship will increase to $400,000.

The five faculty to receive named fellowships are:

Mark Hinojosa, associate professor, was selected as the John A. Walsh Faculty Fellow. The fellowship is a gift of John and Ellen Walsh. John Walsh, MA ’69, is considered the architect of ESPN and one of the most transformative figures in sports journalism. He retired as executive vice president of ESPN in 2015. Hinojosa is a two-time Pulitzer Prize judge and has lectured both nationally and internationally on multimedia, newsroom convergence and audience engagement. He teaches convergence journalism. Hinojosa has served on the boards of the National Association of Hispanic Journalists, the Online News Association and Street Level Youth Media, an organization committed to teaching media awareness to urban youth. He is also a founding board member of the Knight-Batten Awards for Innovations in Journalism.

Mark Horvit, associate professor, was selected as the Donald W. Reynolds Faculty Fellow. This fellowship is a gift of Christopher and Sarah Cox. Christopher Cox, BA ’87, JD ’92, is a partner with Cadwalader Wichersham & Taft LLP in New York City. The fellowship honors Donald W. Reynolds, BJ ’27, the late media entrepreneur and philanthropist, and founder of Donrey Media Group. Horvit teaches investigative reporting, and is director of the School’s State Government Reporting Program. He previously served as executive director of Investigative Reporters and Editors (IRE) and the National Institute for Computer-Assisted Reporting (NICAR), where he conducted training in investigative reporting and data journalism throughout the world. Horvit worked as a reporter and editor for 20 years before joining IRE.

Jeimmie Nevalga, associate professor, was selected as the Mark and Kiki Hoffman Faculty Fellow.  The fellowship is a gift of Mark and Kiki Hoffman. Mark Hoffman, MA ’80, is an award-winning broadcast journalist who currently serves as chairman of the business news channel CNBC. Nevalga has more than 10 years of experience producing traditional and non-traditional newscasts. She began her career at WISN 12, the ABC affiliate in Milwaukee as a producer for their two-hour morning show. Later Nevalga served as the producer for the 6 p.m. evening news. In 2005 she made the jump to Chicago, her hometown, where she worked as producer and executive producer for CLTV, a 24-hour local cable news station.

Shelly Rodgers was selected as the second Molly Phelps Bean Faculty Fellow. Molly Phelps Bean, BJ ’43, was a longtime Kansas City, Mo., resident and civic volunteer, who served as a board member of Tnemec Company, Inc. Rodgers is a professor of strategic communication. Her research examines the ways digital media allow us to create more effective advertising and, as a result, prod people toward healthier behaviors. She is nationally ranked as one of the most productive Internet advertising scholars and is among the 10 most cited Internet advertising researchers.

Ryan Thomas, associate professor, was selected as the Wallace Turner Memorial Faculty Fellow. Wallace Turner, BJ ’43, was a Pulitzer Prize-winning journalist with The Oregonian and The New York Times. The fellowship is a gift of his brother, William V. Turner, BS BA ’56. Thomas’s research addresses the intersection of journalism ethics and the sociology of news, focusing on journalism amid processes of change: the forces shaping journalism, how journalists make sense of them, and how these changes affect journalism’s institutional obligations and role in public life. Thomas teaches Principles of Journalism in Democracy at the undergraduate level and Media Ethics, Media Sociology, Philosophy of Journalism, and Qualitative Research Methods at the graduate level.

Donald W. Reynolds was a 1927 graduate of the Missouri School of Journalism and spent his life building the Donrey Media Group, ultimately owning more than 100 enterprises in the newspaper, radio, television, cable television and outdoor advertising industries.

The Donald W. Reynolds Foundation gift for the faculty fellowships follows previous gifts from the Foundation to build the Reynolds Alumni Center and to build and fund in perpetuity the Reynolds Journalism Institute (RJI) at the Missouri School of Journalism.