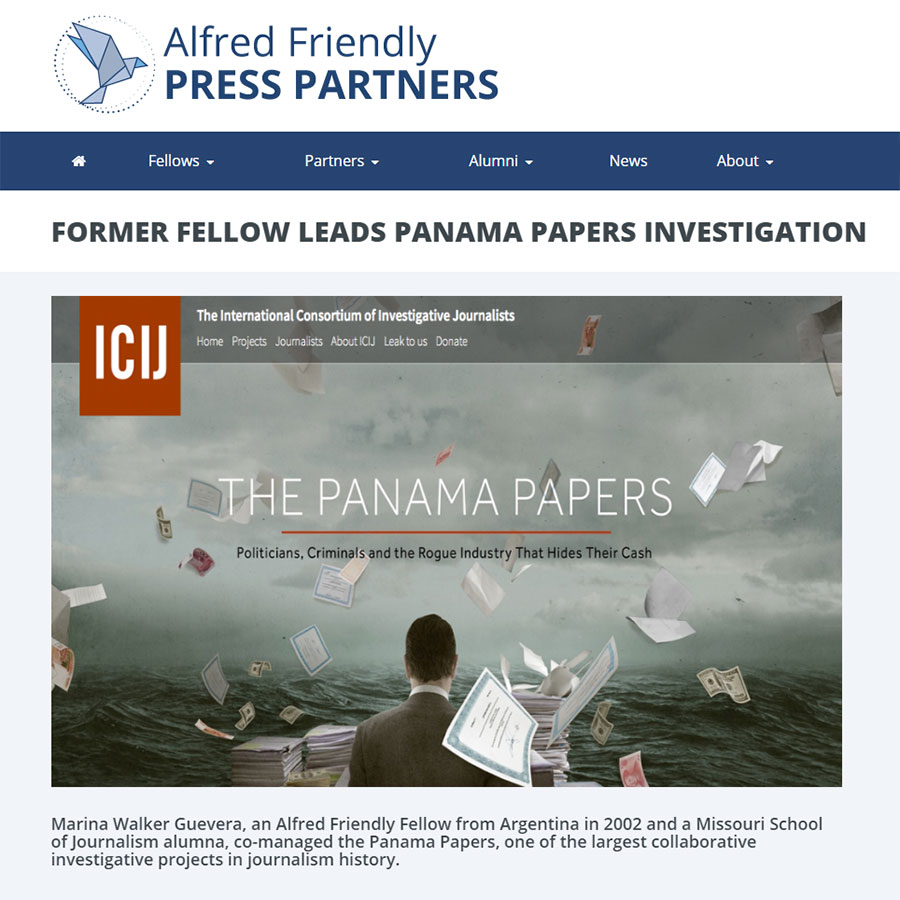 Marina Walker Guevara Will Speak on Thursday, Nov. 3, at the Reynolds Journalism Institute

Columbia, Mo. (Nov. 2, 2016) — Marina Walker Guevara, MA ’05, the deputy director of the International Consortium of Investigative Journalists, will share dramatic, behind-the-scenes details about several major investigative projects on Thursday, Nov. 5, at the Missouri School of Journalism. The ICIJ is a network of nearly 200 investigative journalists from 65 countries.

Walker, deputy director of ICIJ, will attend a reception for students, faculty and staff in the Palmer Room behind the Reynolds Journalism Institute lobby at 5 p.m. on Thursday, Nov. 3, and will participate in a moderated discussion at 7 p.m. in the Fred W. Smith Forum, 200 RJI.

Among the investigative journalism projects Walker will discuss are the Panama Papers, the largest collaborative investigative project in journalism history, and the Swiss Leaks data project, which exposed a system that enabled crime, corruption and wrongdoing to be hidden by secretive offshore companies. The articles triggered protests and government investigations, compelled reforms and caused government resignations, including the prime minister of Iceland.

Walker, MA ’05, won the 2016 Alfred Friendly Press Partners award for outstanding journalism, given to a graduate of its fellowship program. She came from Argentina and worked at the Philadelphia Inquirer during the program.

Alfred Friendly Press Partners, which has trained more than 300 international journalists from 80 countries since 1984, is a nonprofit organization that recently moved its office to RJI and formalized a partnership with the Missouri School of Journalism. Professor Randy Smith is the president of the organization, and David Reed, BJ ’83, directs the program.