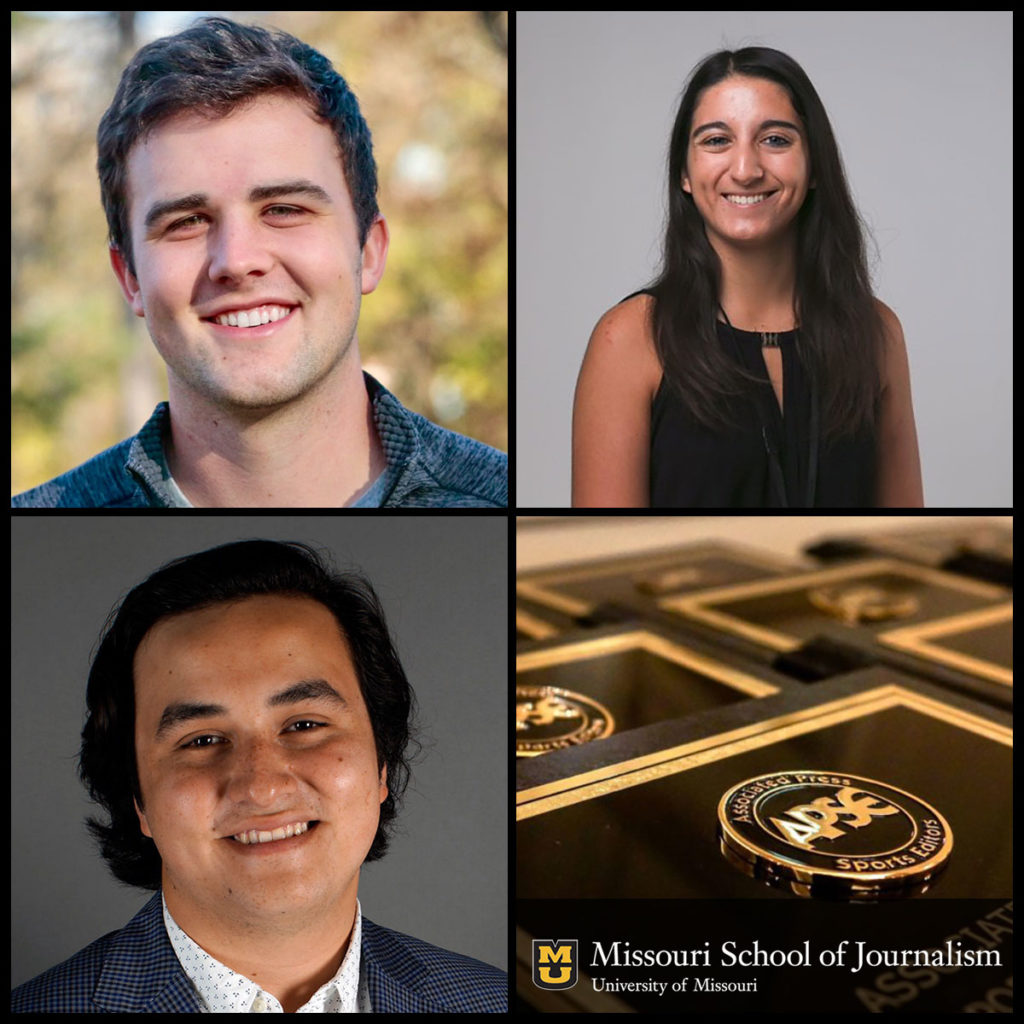 Clockwise from top left: Brad Almquist, Danielle Lerner and Aaron Reiss were honored by the Associated Press Sports Editors for work published in the Columbia Missourian, the Houston Chronicle and the Louisville Courier-Journal in Kentucky.

Columbia, Mo. (April 4, 2017) — The Columbia Missourian and three Missouri School of Journalism sports reporters have placed in the top 10 in several categories of the Associated Press Sports Editors competition for work produced during 2016. Sports editors and journalists from across the nation selected the winners during four days of judging in Lake Buena Vista, Florida.

The national contest recognizes excellence in professional sports writing. The Missourian competed in Category D, which includes publications with circulations of less than 30,000. The Missourian was named one of the top daily sports sections in the under-15,000 circulation group and received honorable mention in the under-30,000 category.

The Missourian has won more than 50 APSE awards in the past 10 years, a “continuing tradition,” said Mike Jenner, interim executive editor of the Missourian.

Three sports reporters at the Missourian qualified in the contest’s category of newspaper circulation under 30,000.

Aaron Reiss, a senior magazine journalism writing student from Houston, placed in the top 10 for column writing in the 30,000-and-under circulation category. He wrote columns during the fall 2016 semester as part of his studies with former Missourian sports editor Greg Bowers. Reiss also was part of a team entry in the projects category, 175,000-and-up circulation division with the Houston Chronicle, where he interned last summer. Reiss will intern in the sports department of the Minneapolis Star Tribune this summer.

“I’ve placed top 10 in the APSE contest five times now, and even though we don’t write stories for awards, being honored remains a cool feeling,” Reiss said. “It’s a validation that the work Greg pushed the Missourian sports section toward was worthwhile and thought-provoking.”

Brad Almquist, a senior from Cincinnati who is studying print and digital news with an emphasis in sports, placed in the top 10 for feature writing in the 30,000-and-under circulation category. In summer 2016, he wrote for Football Fancast in London, covering the Euro 2016 soccer tournament and the English Premier League. In 2015, Almquist was a sports intern for NBC Cincinnati, after writing for Bleacher Report for about a year. He will intern with the Boston Globe sports section this summer.

“The Missourian has a long history of winning these awards, evidenced by the dozens of APSE plaques that hang on the wall near the Missourian sports desk,” Almquist said. “It’s pretty cool knowing my name will be added to the wall.”

Danielle Lerner, who graduated in spring 2016, also placed in the top 10 for feature writing in the 30,000-and-under circulation category for Missourian. In addition, she was a top 10 feature-story finalist in the 75,000-175,000 features category for the Louisville Courier-Journal in Kentucky, where she is now employed.

The journalists credit the Missouri Method of hands-on learning in the School’s professional newsrooms in setting their articles apart from others.

“The Missouri Method is the reason why I and many other Missourian reporters were able to progress quickly,” Almquist said. “My first responsibility at the Missourian was to cover a high school basketball game. I had little reporting experience, but I quickly learned how to cover games because I did it so much.”

The journalists also appreciate the help they received from Bowers.

“My sports editor, Greg Bowers, encouraged me to take risks and write stories with scenes,” Almquist said. “I think I wrote about 40 stories in three months. The relentless schedule forced me to learn quickly.”

“I’ve been exceptionally lucky to learn from professors at MU who have been invested my success,” Reiss said.